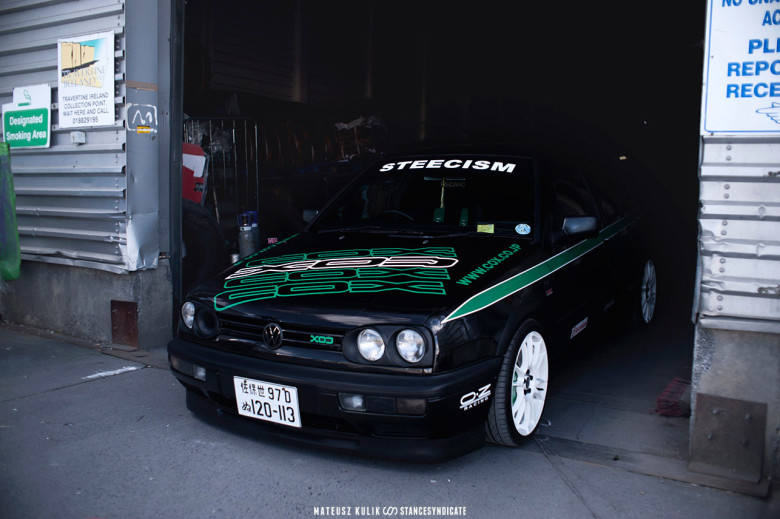 A Mk3 Golf that you probably have never heard of… Rare? Rare as fuck! Number 11 of 18 made – Volkswagen Golf Mk3 GTI COX 420Si 16v. Straight from Japan! Believably one of two in Europe. Now proudly here in Dublin, Ireland. What’s the story?

From the very moment Stee got his hands on this uncommon Mk3 Golf I knew that I will need to shoot it. It’s hard to explain. But the numbers, these magical numbers, 11 & 420, to be precise, have got me weirdly obsessed to get a few pictures of this unusual Golf GTI.

I couldn’t wait to finally see Stee’s COX… I know, it sounds queer… but it’s no hoax. Not an another April Fools’ Day. I could not believe myself that this Mk3 is actually a rare gem. A mysterious German with a Japanese twist. If to believe history – this duo can prove lethal, boy.

Drop dubs, not bombs… peace and love. I light up a spliff, ¡Sí Señor!. Blue Cheese. We’re shooting a rare VW Golf Mk3 GTI 420Si 16v. The sun is out. Weather’s sound. Plenty of trucks around.

Stee’s not only mad about cars, of which some have been featured here and on StanceSyndicate’s Facebook – like his Audi S4 B5 or the über low static Mk3 GTI, a Japanese import as well. He’s also quite into trucks…

So the only place to shoot his COX… was at the truck company that his brother co-owns. Surrounded by Scania and Renault trucks, including a racing one, together with Stephen from BvtchxrSqvad we got on shooting this unique Volkswagen Golf.

COX Speed Inc. was founded in 1978 in Japan with a mission to develop unique vehicles based on Volkswagen and Audi platforms, optimising the tuning and performance techniques already mastered in Germany.

The company took standard cars and added some Japanese flair in order for them to outshine the likes of Toyota and Nissan on the racing circuits. Their mission was to develop a bespoke vehicle that combined sports performance without compromising on daily comfortable use. While increasing speed, drivability, comfort and safety, and allowing drivers to understand the “real tuning” philosophy the company lives by.

Over twenty years ago COX Incorporated produced a short series of Mk3 Golf based complete COX cars, including a Mk3 GTI COX 628Si based on the VR6 Golf and seen here Mk3 GTI, sporting the 420Si 16v marking on the rear quarters – denoting the 4 cylinder 2.0 litre ABF lump under the bonnet.

Tuned specially for both road and track use, this vehicle, number 11 of 18 made, boasts standard features from the factory like: LSD gearbox, driver’s Recaro SPG seat with Takata 4-point racing harness, Ohlins adjustable suspension, COX ECU mapped for 110 octane fuel and COX stainless steel cat back exhaust system – to mention just a few.

Of course, it came with a set of COX badges like the ones on the quarter panels, in the rear or on the wings as well as one on the front grille – which is mirror flipped. I asked Stee why is it that way, and he replied: “so they all can see it’s COX when they look in their rear view mirror”. This is how it was fitted in standard.

Before Stee got this very unique Golf, I have to admit, I never knew such existed. I believe that it may be quite arguable whether a VW Golf Mk3 GTI COX 420Si 16v could be worth as much as a Mk2 Limited. Perhaps because of the fact that the latter was made by Volkswagen it could be seen as more precious, but here, COX made 4 times less of these 420Si Golfs…

Anyway, it’s not about that, though hard currency can be a perfect indicator, an aid to understand something different than the rest. It’d be nice to know, it seems interesting and many seem interested. I have received a number of messages inquiring about this car. But the truth is what the market says. A gem for one, junk for another. Some will say… it’s a fecking Golf anyway.

It’s rare. It’s interesting… much more interesting, to me, than all those fancy Porsches and Maseratis I get to play with recently.

As for a 20 year old car – it’s mint! I was hoping to have this blog published for Dubshed. Stee was hoping to grab a prize for this gem there, as it deserves it, at least a runner up, but the COX livery he got done was made by some amateurs using a sheet of foil and set of Stanley blades…

Some would also argue that it’s not low enough, but Stee knows the lows well and though he’s insane enough to notch the chassis and drive a Mk3 GTI daily, 20mm from the ground rolling on BBS RS’, he’s sane enough to keep the Ohlins, COX factory fitted, suspension in a rare car like this. Hard to blame.

As to its paintwork and show & shine standards, this car was made to do both road and race track… not show & shine, but with a skilled touch – this VW Golf Mk3 GTI COX 420Si 16v would shine again as in 1997 when it was made in Japan by COX Incorporated!

Don’t be shy now Stee, bring it to Wörthersee! #STEECISM

Looking for more? Here a short article about the very same Volkswagen Golf Mk3 GTI COX 420 Si from then years back! When it was still in Japan!