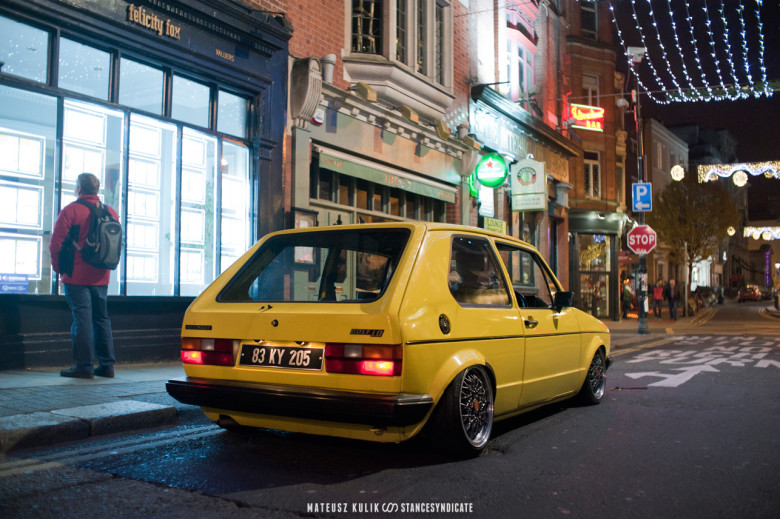 It was a chilly November morning when I got a text from Mo – let’s shoot the Mk1, she’s ready… Happy days, I thought! I was afraid that we will not be able to do this shoot after we had to cancel our earlier photography plans due to some trouble with Mk1’s clutch. Now she was ready… one of the nicest and lowest Volkswagen Golf Mk1’s in the country. Ireland’s pride! I got excited! Let’ go! 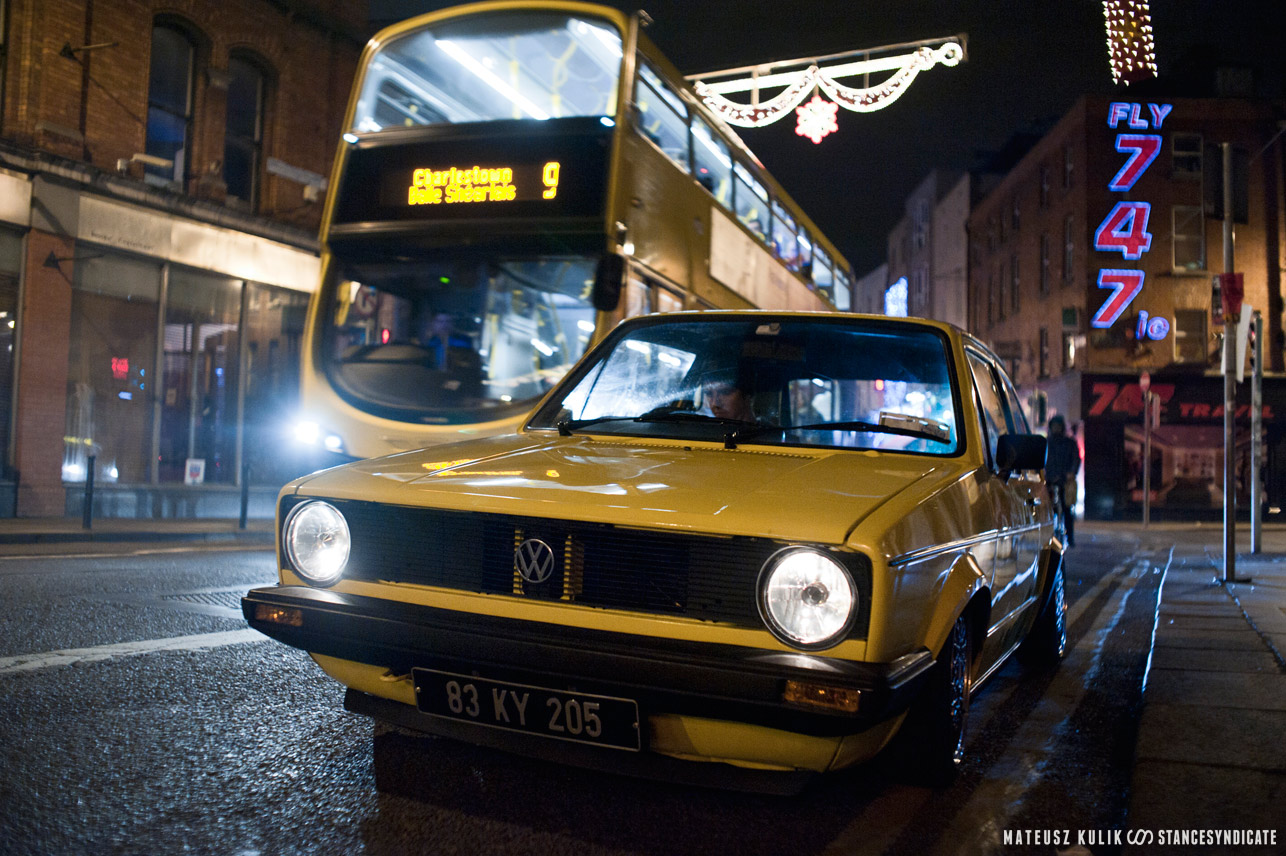 Initially I have planned for this stunner a special treatment. Dusted-down my medium-format Mamiya RB67 camera, equipped myself in two fresh, chilled rolls of 120 film to take not more than 16 exposures depicting this simple yet stunning classic build. Unfortunately its clutch decided not to co-operate and we had to postpone the shoot. 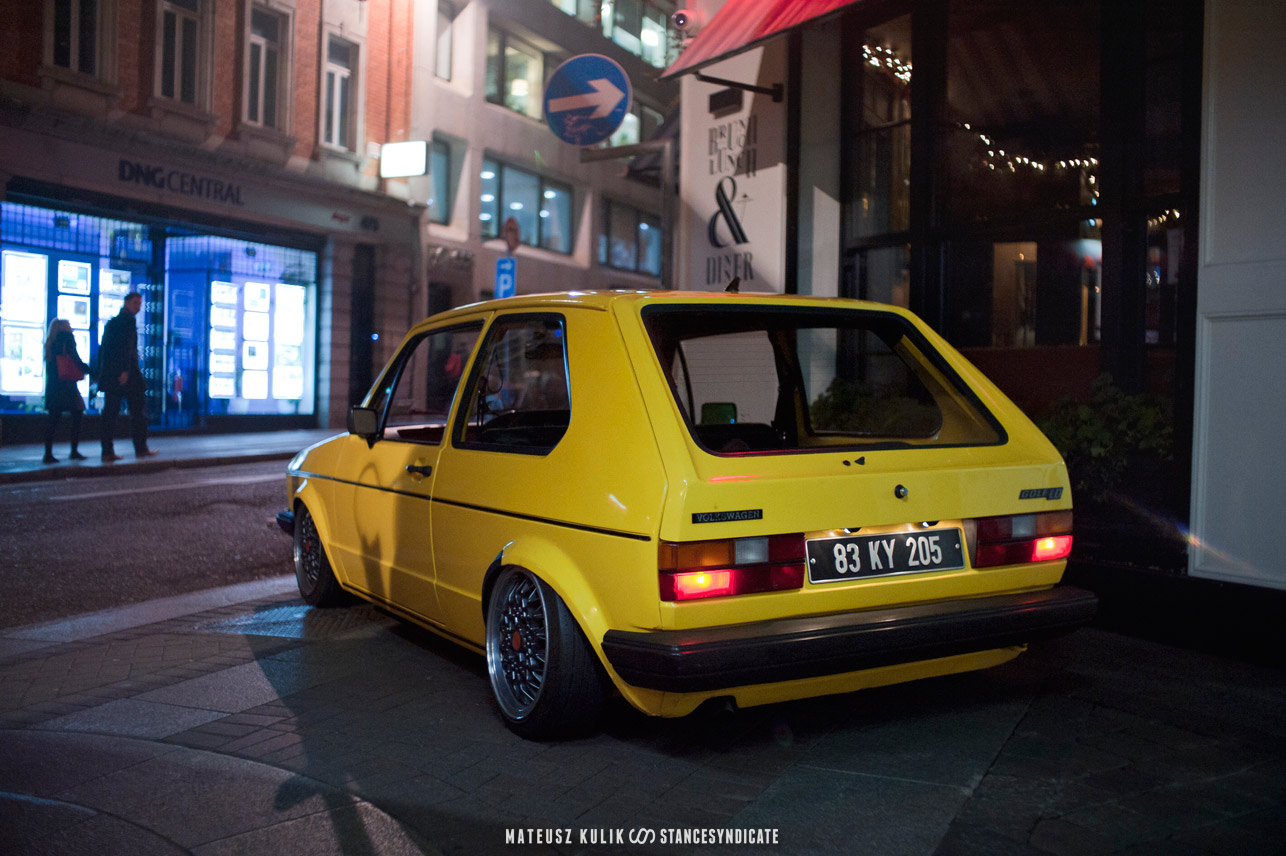 It’s just a simple Volkswagen Golf Mk1. More, a tractor, a diesel drinking yoke – but it got me more excited than 99,9% of those money packed projects I have shot throughout the year. There’s something special about Mo’s projects.

Just like his totally decked ex VW Golf Mk2 1.3. The car wasn’t even near show standards, as you know them, yet, in my opinion, it was an example that should sweep all prizes despite of imperfect paint-work and cheap wheels. This time fake splits don’t need to fuck off. Builds like this – lead by example in the filthy money and Fake Facebook Fame world. More of Mo’s Mk2 here: (FULL ALBUM) 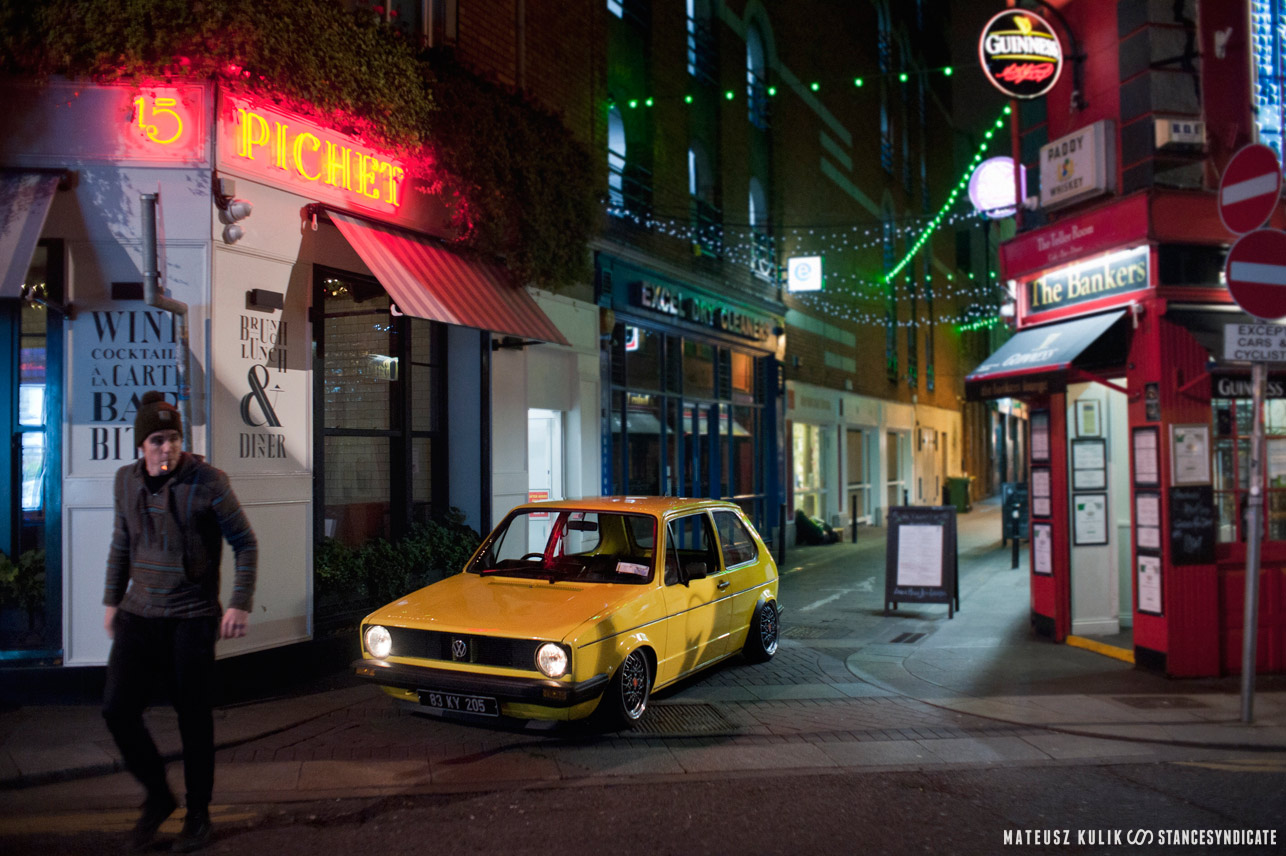 The world’s gone mad in 2016, or even earlier. Loans, usury and “build cold war”. Top secrets on Facebook. Attempts to grow more cock. At any cost. The end justifies the means. The means are two drops of Fake Facebook Fame. Fuck it. Mo does. The game’s not about fame. There’s no game. Simple passion. 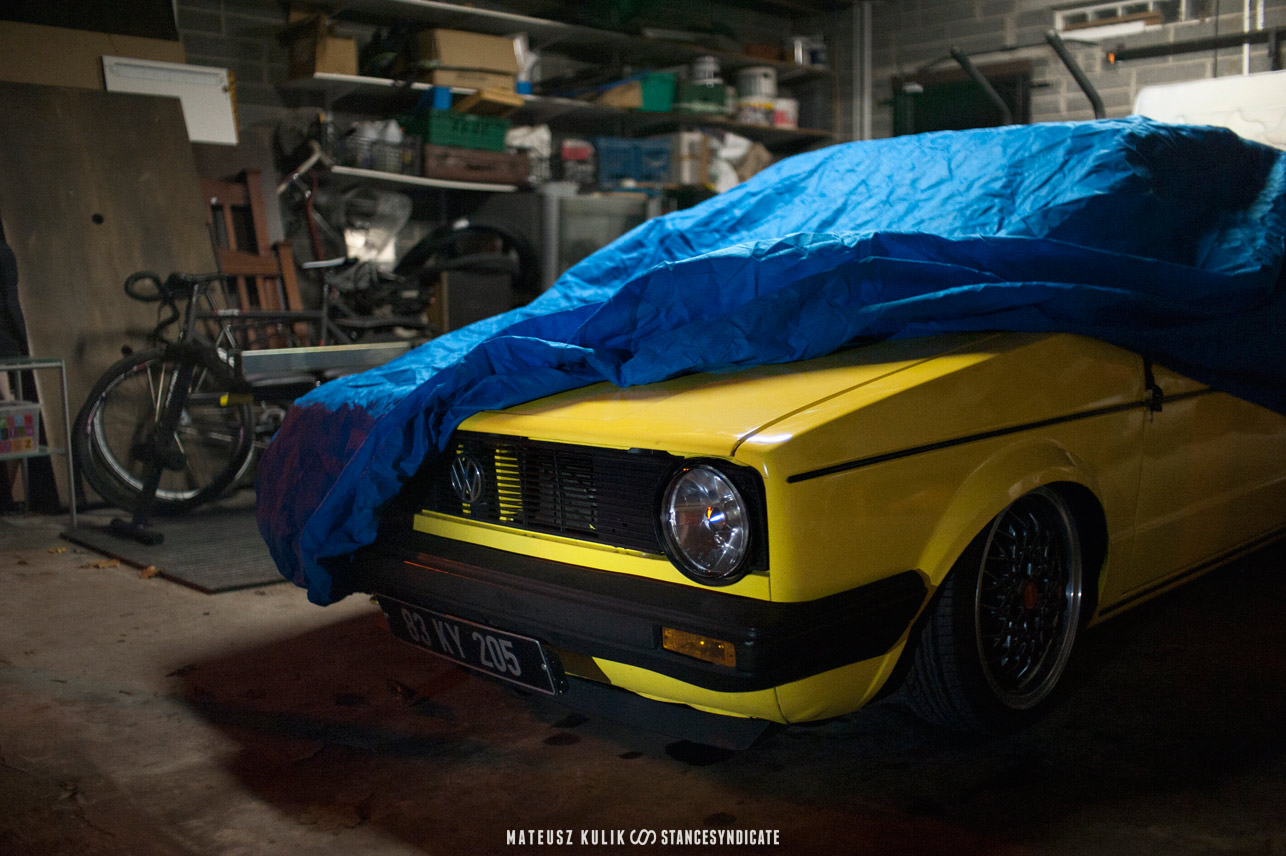 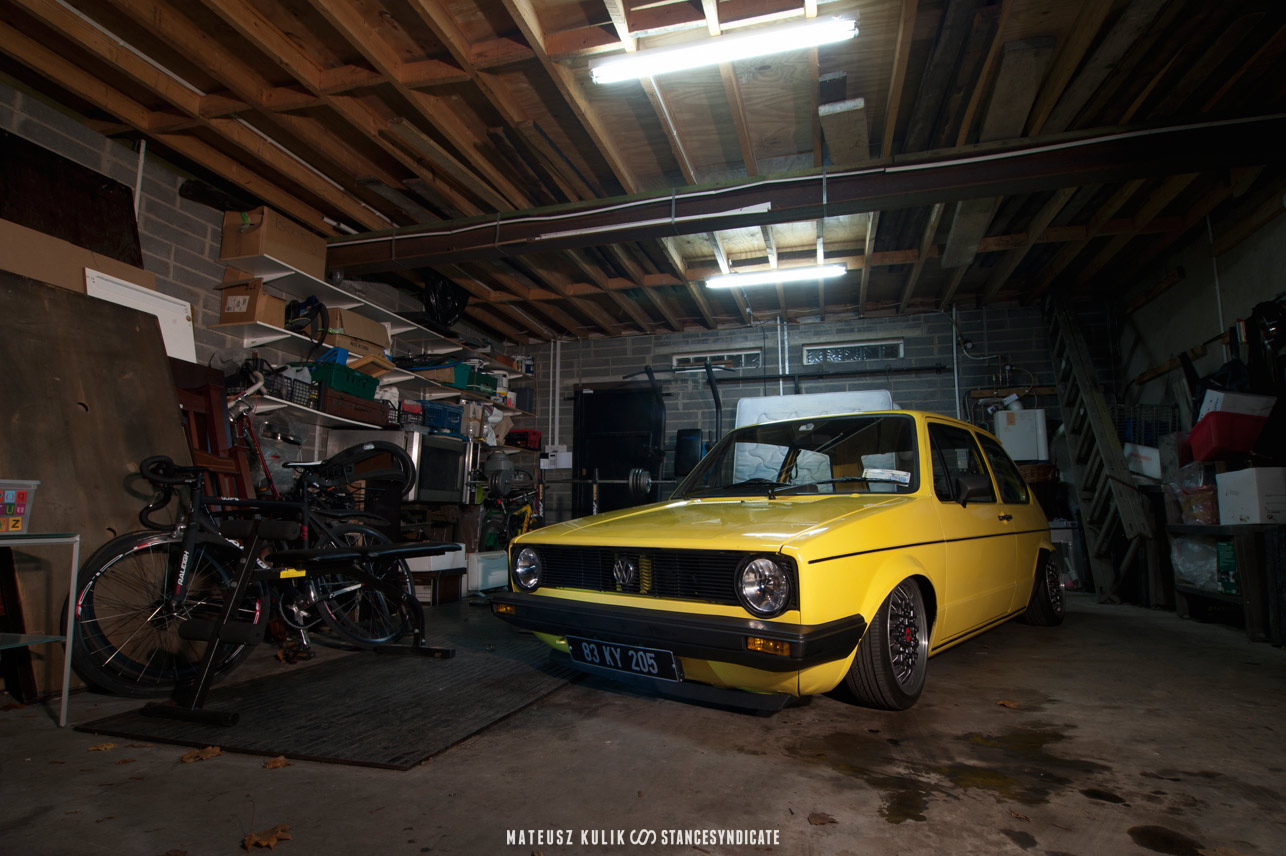 When we arrived at Mo’s garage the Mk1 was awaiting us already. Looking pretty in her modesty, simplicity. OEM with a tiny plus, BBS RA on her hubs. Bellissimo! Thanks to chassis notch and air-ride system from Mapet this set of classic wheels looks like it was made for this car. The Golf doesn’t need more, and Mo, as he’d say, BBS RM, RS’ any of them… they’d be an overkill – it’s a diesel. 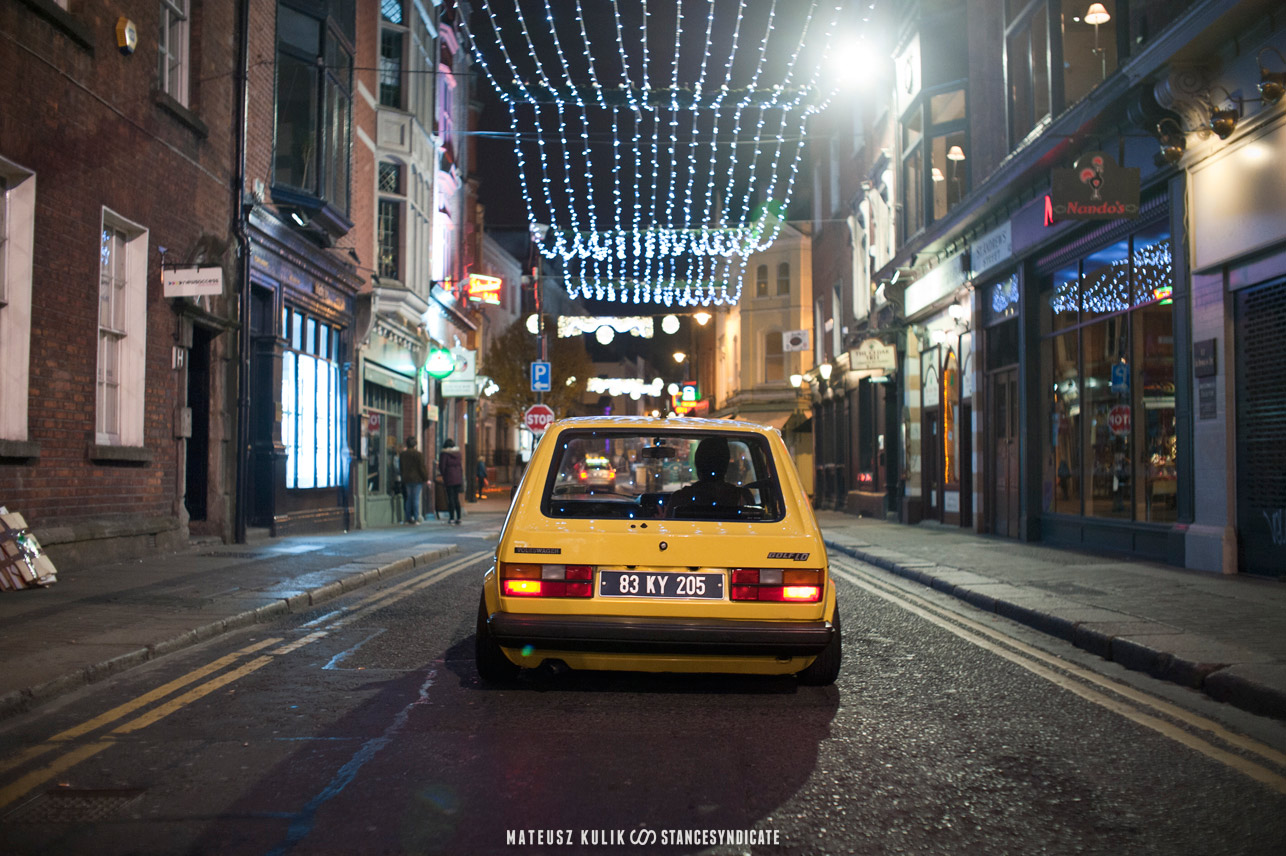 Why to ask for more. The slower you go, the longer they see you – the old proverb says. We took the Mk1 for a small evening cruise around Dublin city centre. The original idea was to do the shoot in daytime on the medium-format camera, but as it doesn’t like night-time fun – the digital one had to be employed. 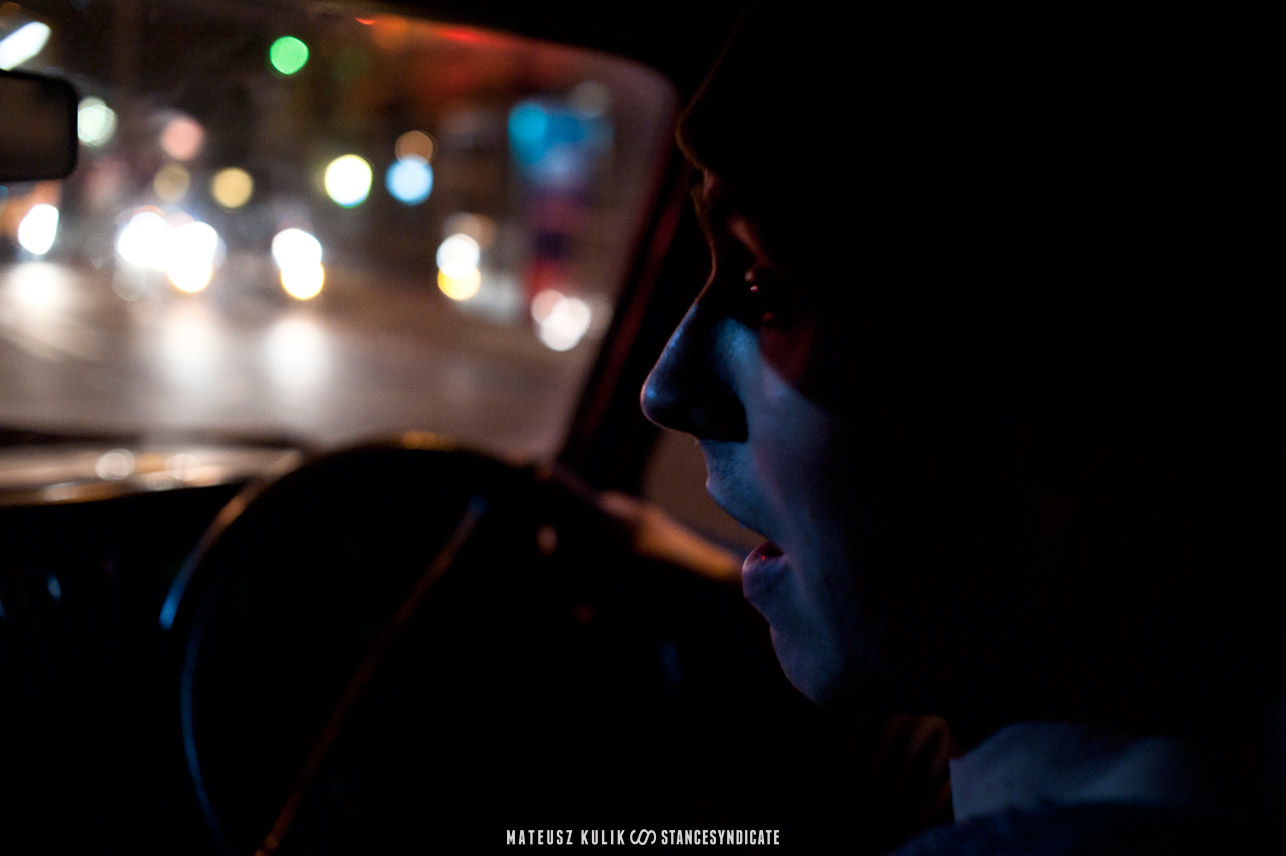 Cruising on the streets of Dublin we chatted about cars and projects, looking for a spot to shoot. We had no plan. It was a pretty much random, impromptu shoot. The only one thing I knew was that we will chat to the Gardai sooner or later. They always appear. Mo has some magical powers or it’s the cars that attract guards. Funny enough, before 1989 police force in Poland was called… MO. 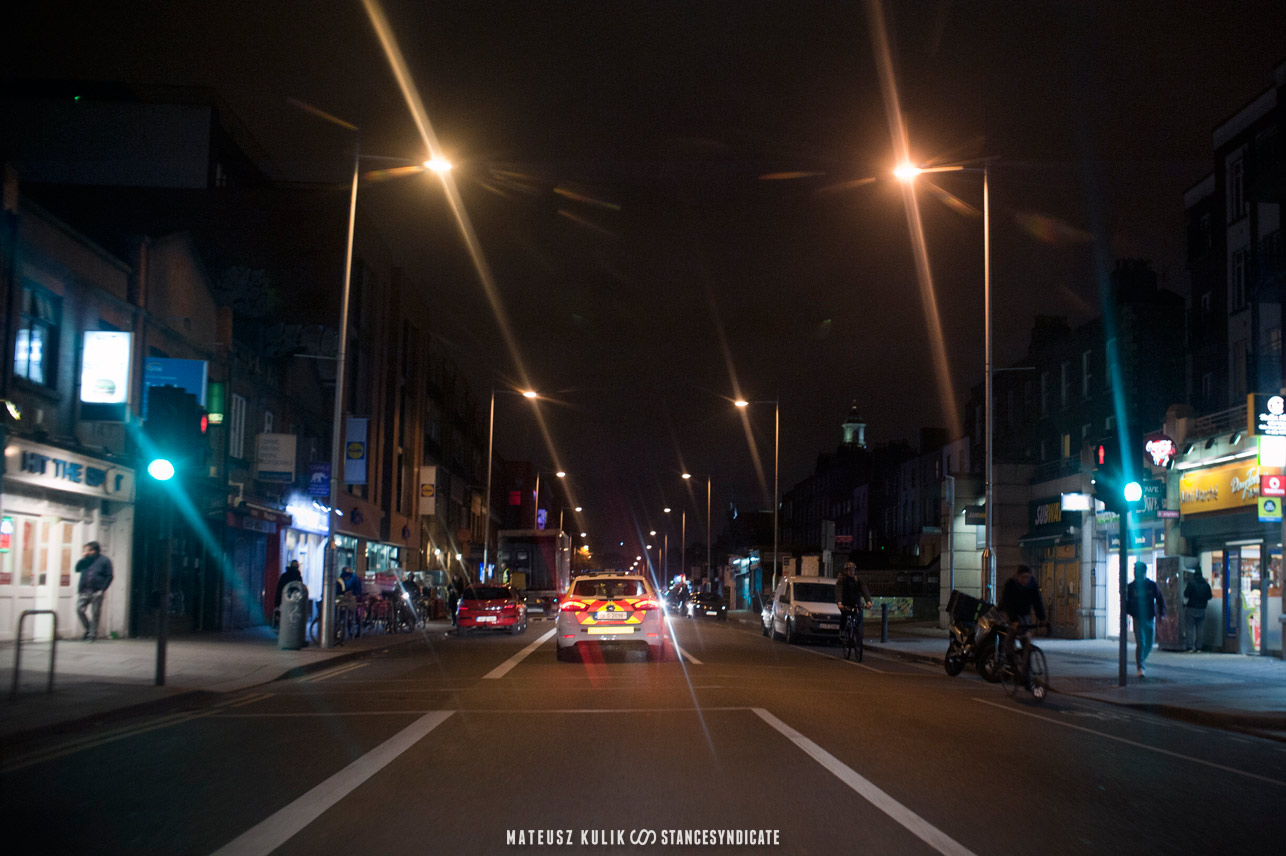 Well, Irish guards, I call for mo..re! I know that by default everyone hates cops, but seriously guys, An Garda Síochána can be visiting us at shoots any time they want. Unlike the Polski Policja, I love them. Most of the time they smile, they’re professional and… when we shoot they understand, they’re able to joke and they show a bit of interest in what we do. In Poland all you can get is a baton over the head, a smack in the kidney or get your car documents taken away. You’d be waving goodbye to your car watching it getting destroyed being pulled on the trailer. Frontlip getting cracked. Wheels being scratched. See, in Poland all these fellas we were bullying at school went to serve… so now they have licence to bully, poor underrated creatures. Servants of the system… eh, I’m getting too political, while those braindeads don’t deserve a line of text. Big up here for all the good cops out there! 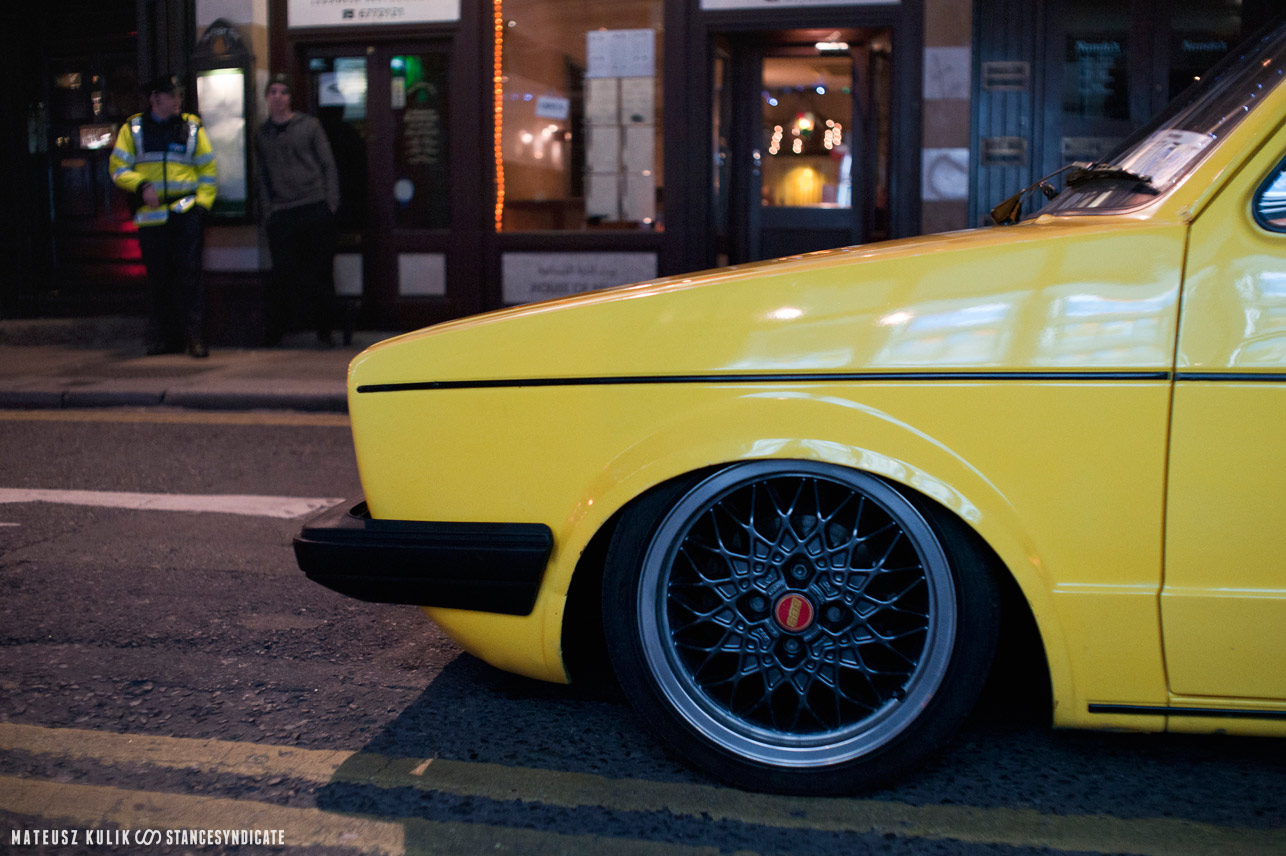 With no trouble and no hassle from the guards we were able to bring Mo’s Mk1 to a few interesting spots – like Grafton Street. All to show a bit of beautiful Dublin getting ready for Christmas. I think she looks really pretty in front of luxury department store Brown Thomas. She’s a million dollar baby worth a fraction of the seven digits. 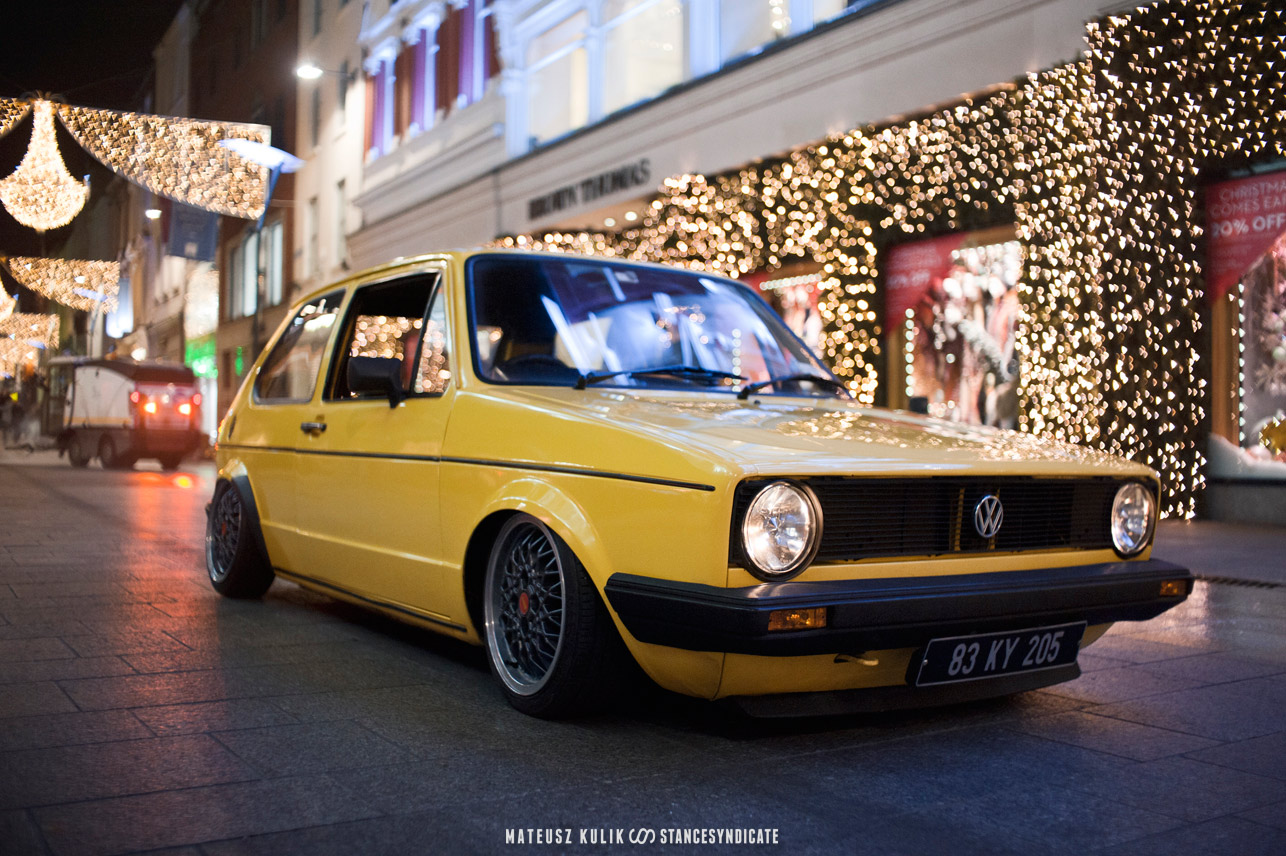 In my opinion Mo’s Golf Mk1 is a perfect example of what today’s scene is not. It has no super-fancy wheels, Mo has no 10k loan to pay-off, she’s a result of passion, a result of his modest dreams – she’s not a cock-growing tool. I love it and I hope that in 2017 we will see more cars like Mo’s. Real yokes. Build out of passion. Fake Facebook Fame can fook off. 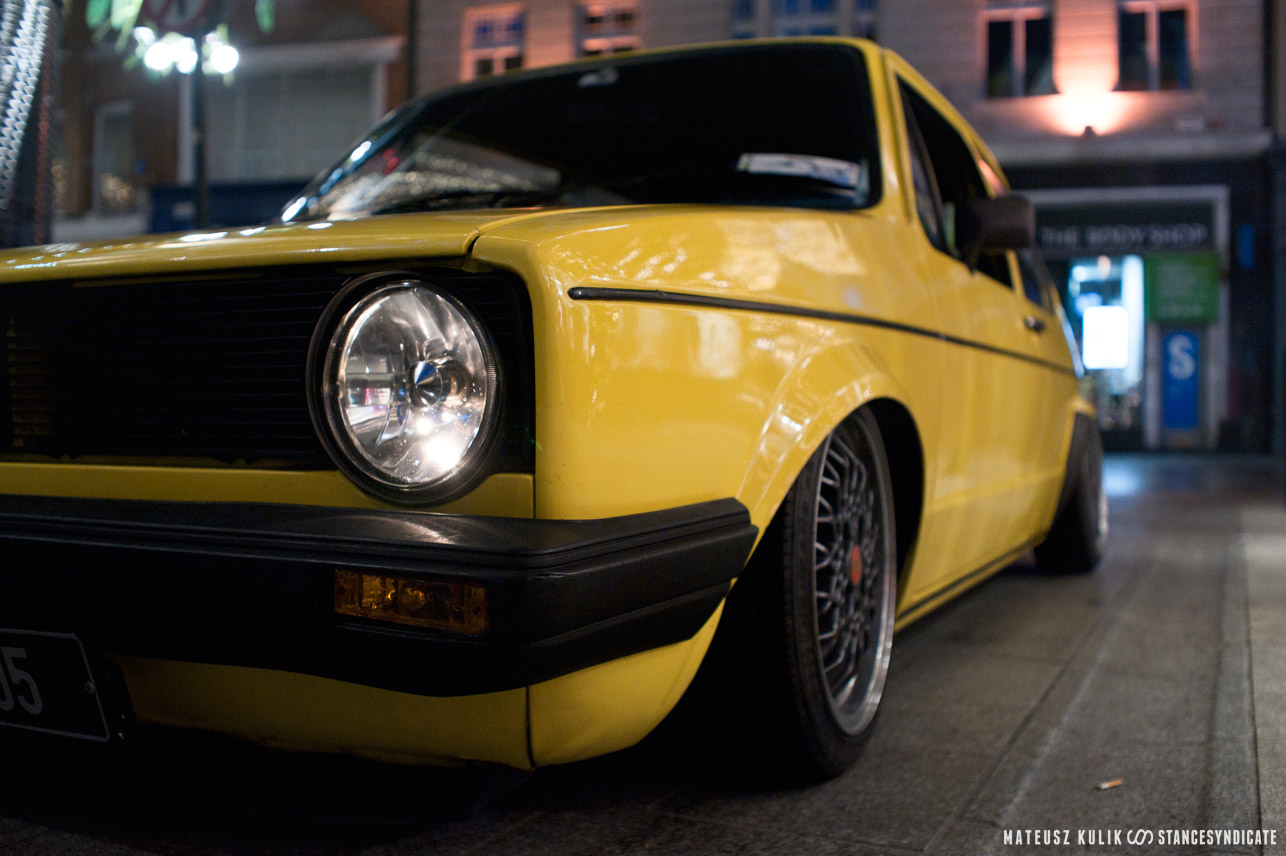 Big thanks to Mo for a great evening while shooting the Mk1! 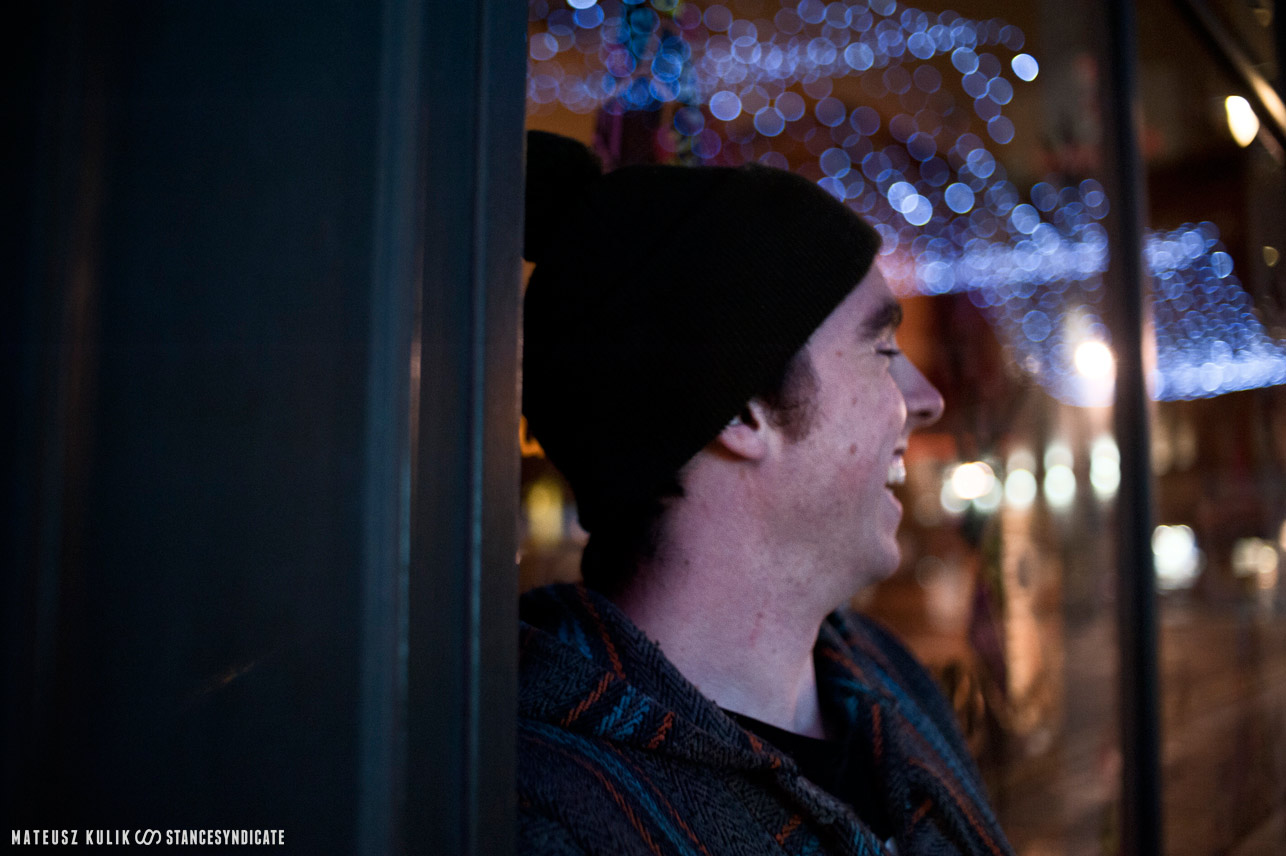 How it all happened? Where’s Mo Mk1 Golf coming from? Read Mo’s own Mk1 story:

Have had the “Mk1 itch” for years. Got it from one of my best friends about 9 or 10 years ago when he bought a black 1.6 GTI (that he still has, and is in the middle of restoring now). I just never had the money for one then, but knew I’d own one someday. 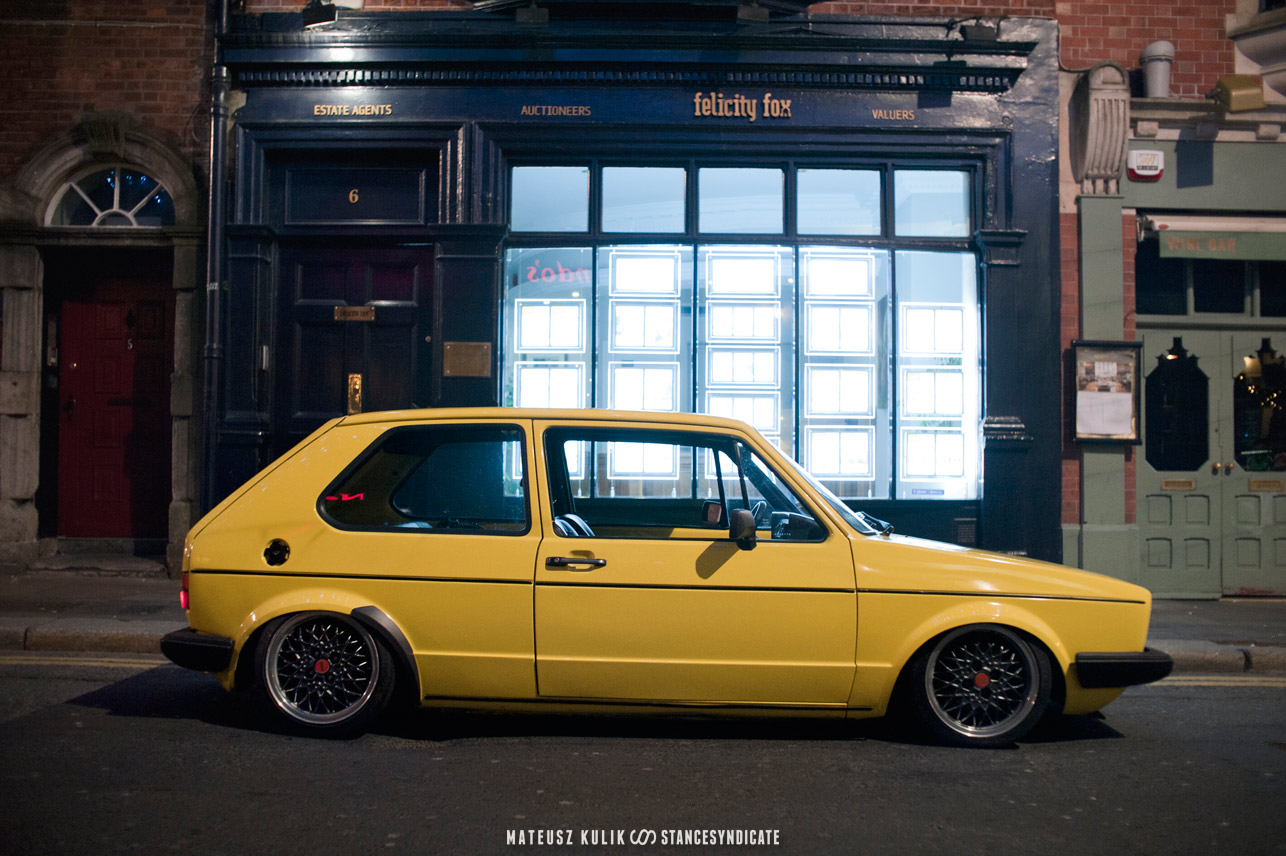 Put my old Mk2 golf up for sale in early 2015 as had decided to move in with my long suffering girlfriend. The apartment we were looking at only had one parking spot, so had to be for our daily Polo. 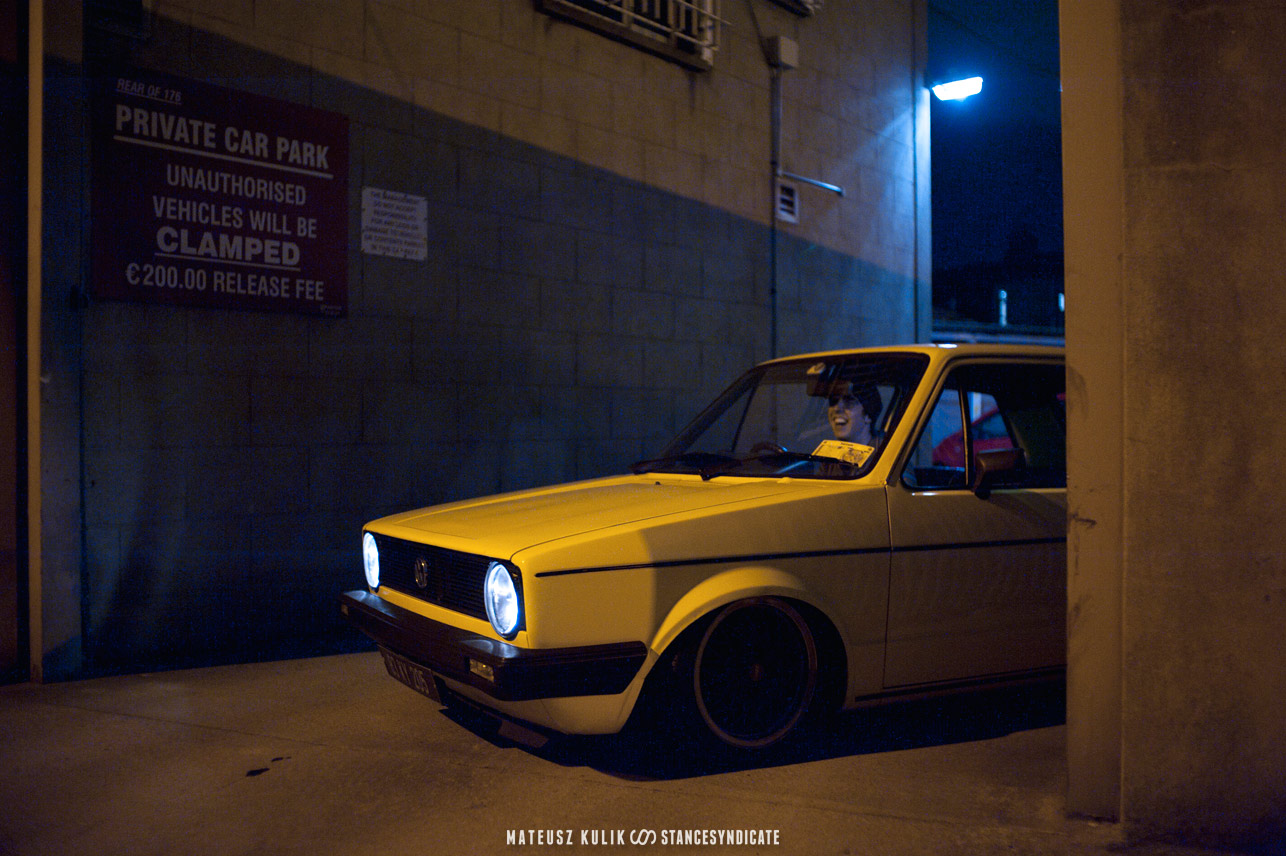 Before the Mk2 even sold, the Mk1 came up for sale. I bought it from a guy in the midlands and it never skipped a beat on the way home to Dublin. It’s painted Lemon Yellow which is a bit mad admittedly, but it’s an original Mk1 colour which was all I cared about. All of a sudden I had 3 cars and one parking spot, but I knew I’d sort something. Luckily the Mk2 sold quite fast to free up funds to allow for work on the Mk1. The only issue was that I had nowhere to store or work on it. 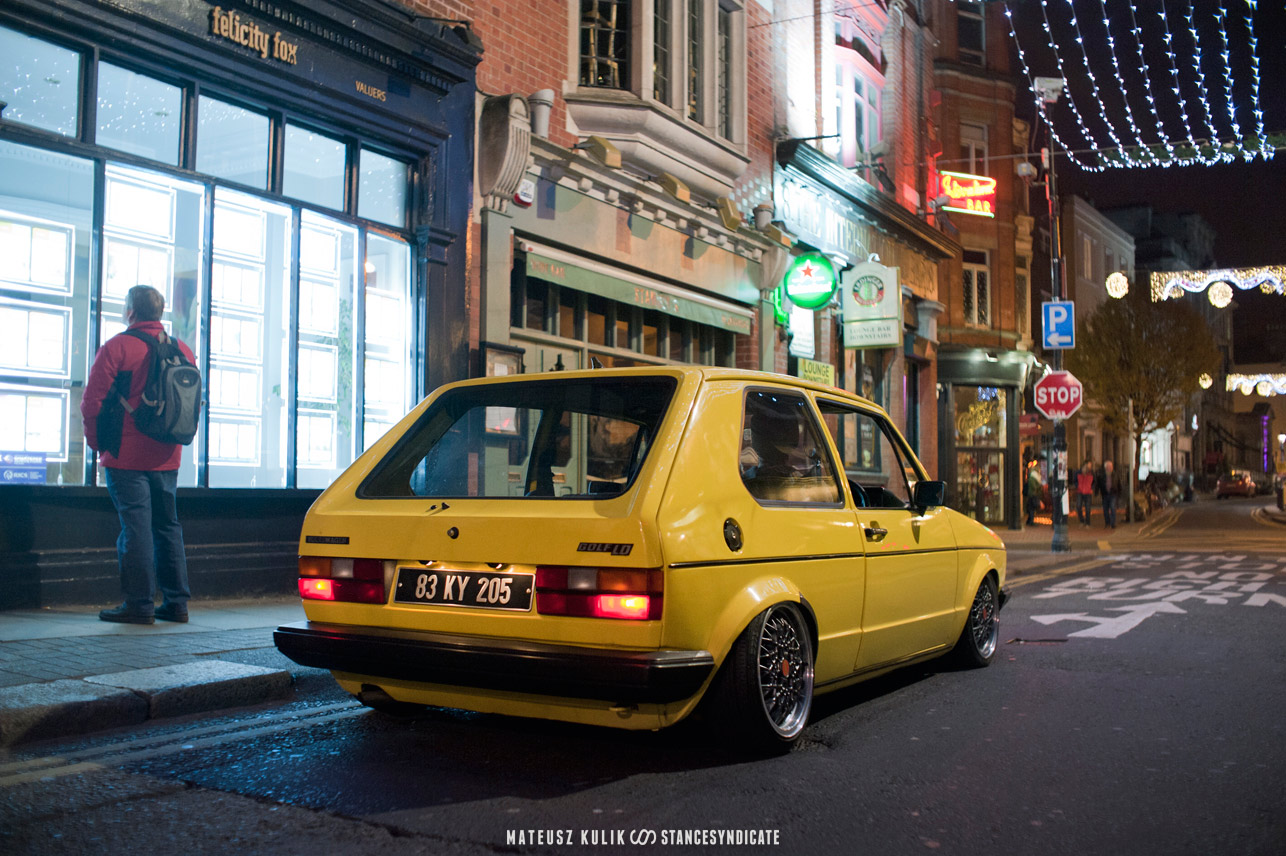 For a few months I stored it between a friends garage, my parents driveway and my grandmothers house in Kilkenny. I wasn’t being charged for keeping it in any of these places which was great, but I couldn’t work on it either. 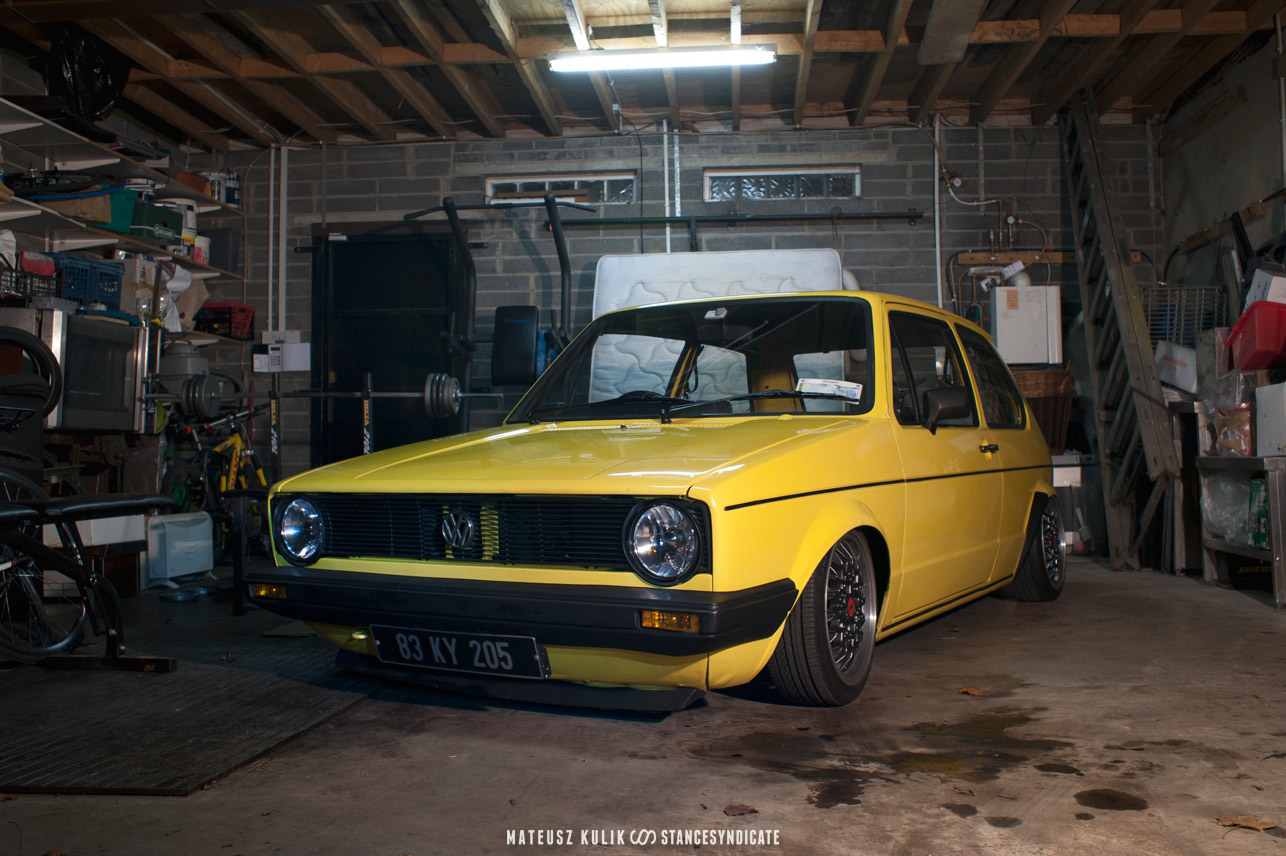 Fast forward a few months and I bumped into a gent cleaning out his garage down a back lane in Rathmines, less than 30 seconds walk from my apartment. Had a chat and struck a deal. Was delighted that I could finally start working on her. 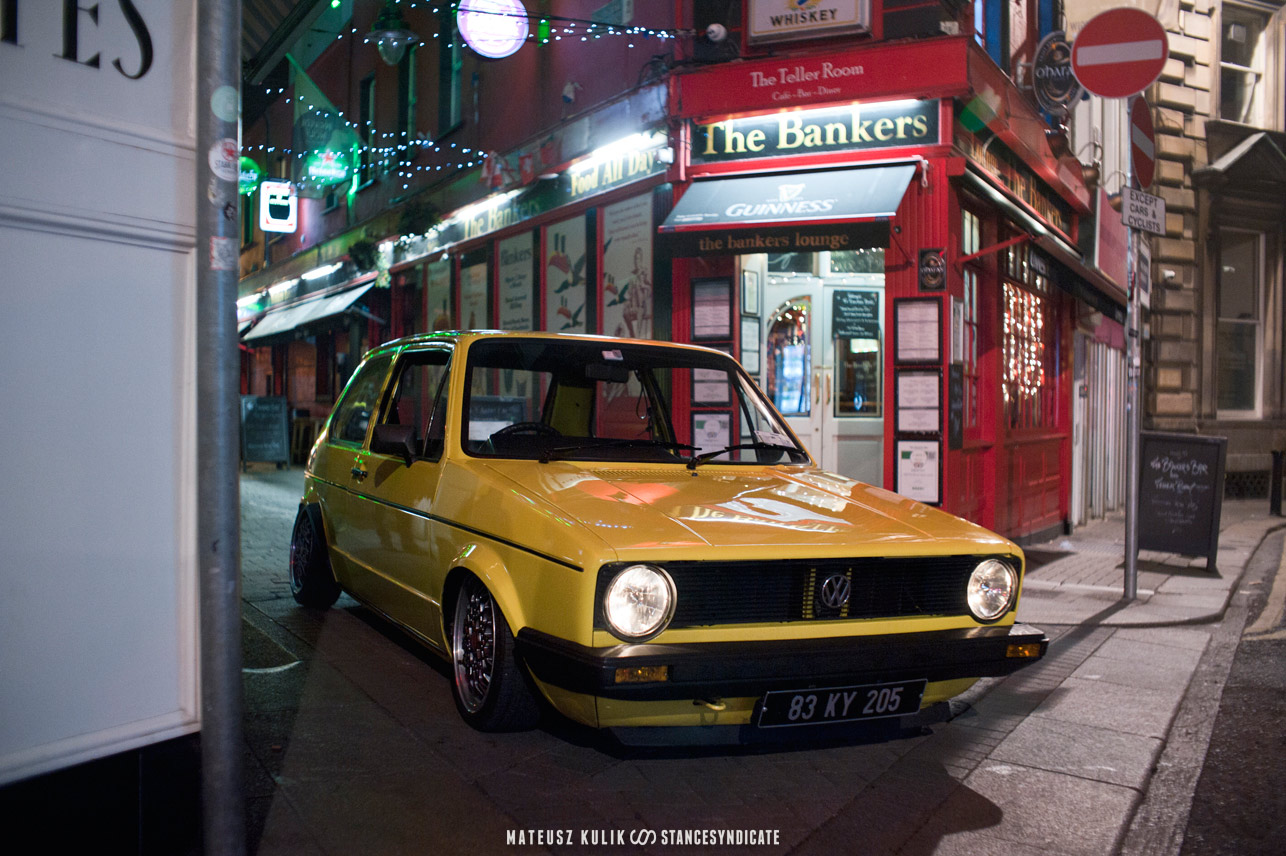 Friends will tell you that my ethos with cars has generally been to clean them up, and lower them on period correct style wheels. Fairly OEM I suppose, and I didn’t intend on this being much different. Swapped the 4 speed box for a 5 speed (and also did the linkage repair kit) to make it more practical and also sorted a lot of wiring gremlins to make it reliable. Mk3 golf wiper motor and plug and play updated headlight loom as both original units are fairly poor. De-wipered the rear for a cleaner look and put the original rear clusters back on & original amber front lenses. Exhaust tip was beyond polishing so welded on a stainless tip. Bit of rust treatment underneath to keep her solid. When it got to a standard was happy with, I decided to head down the modifying route. 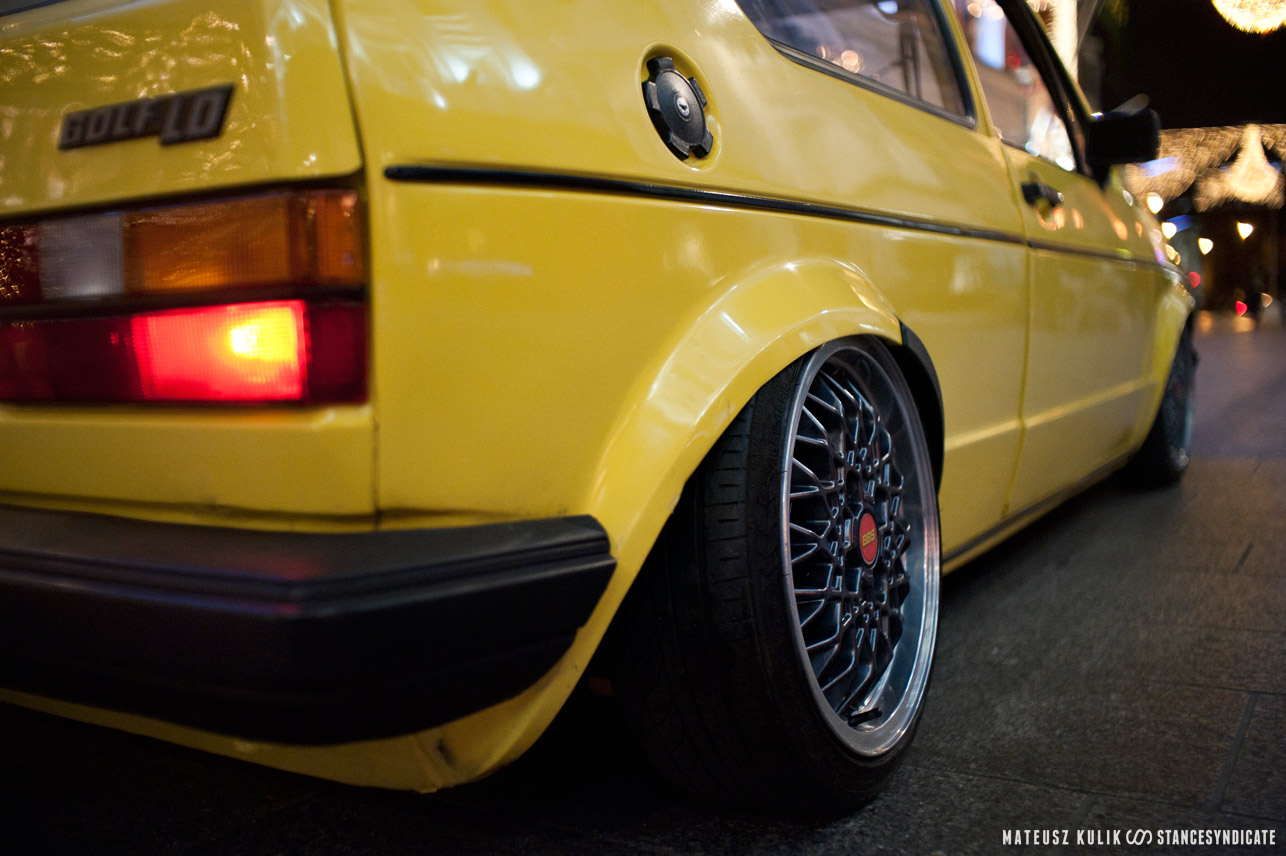 A basic air-ride setup, a pair of chassis notches in the front and cambered drop plates in the rear got her down. Also flattened the pinch welds on the wishbone mounting points at the front for an extra 10mm or so. Sits on the floor now fully aired out anyway. Wheel wise I had standard BBS RMs for a while, but they kept leaking air, so ditched them in favour of the simpler BBS RA with a polished lip. 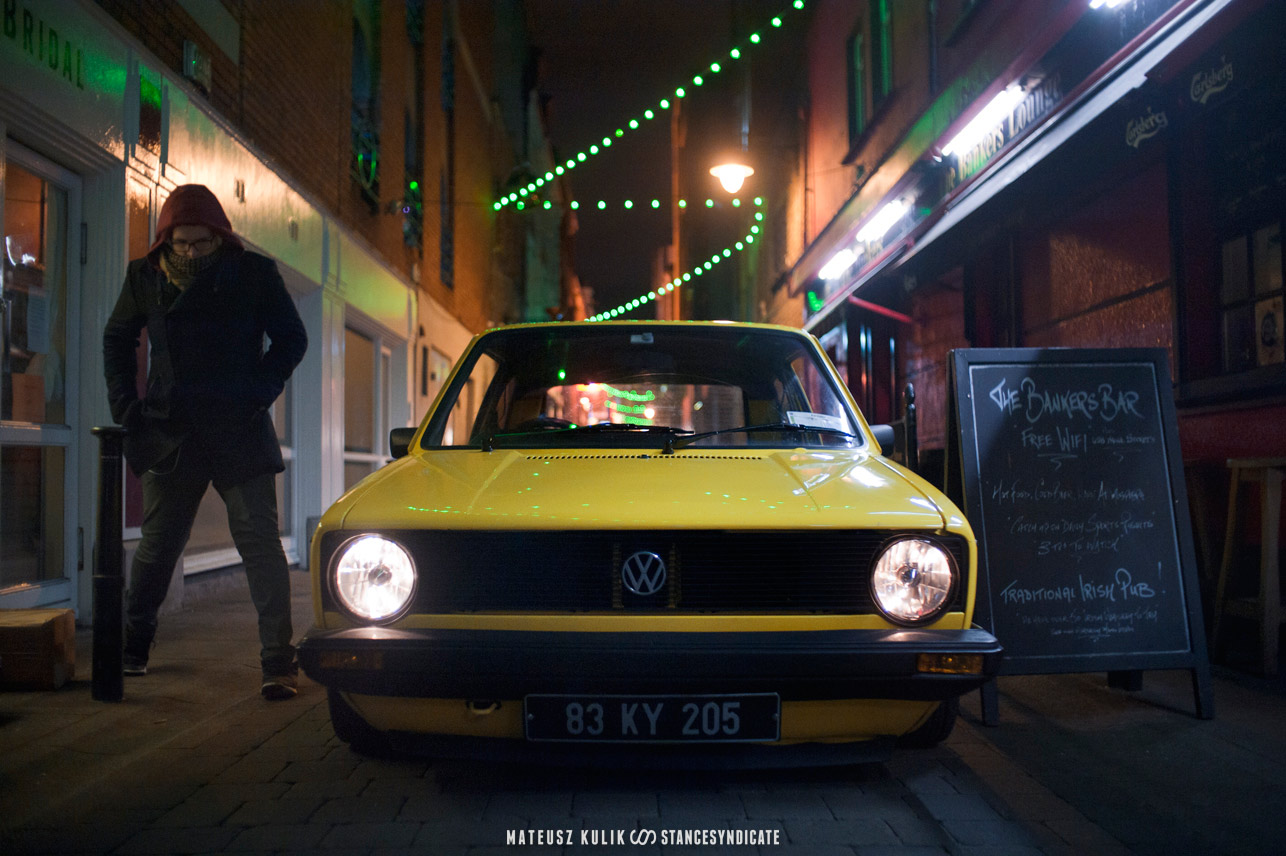 At the moment I can say the car goes like clockwork. Took a while to get everything tuned in, but it doesn’t let me down. I’m just enjoying driving it at the moment. The 1.6D can get a bit boring & long term i will go for a bit more power. I don’t mind modifying it either, as it’s a bit of a mongrel already. Originally a white English van, its come through its fair share of changes in the past so I don’t mind putting it through a few more. 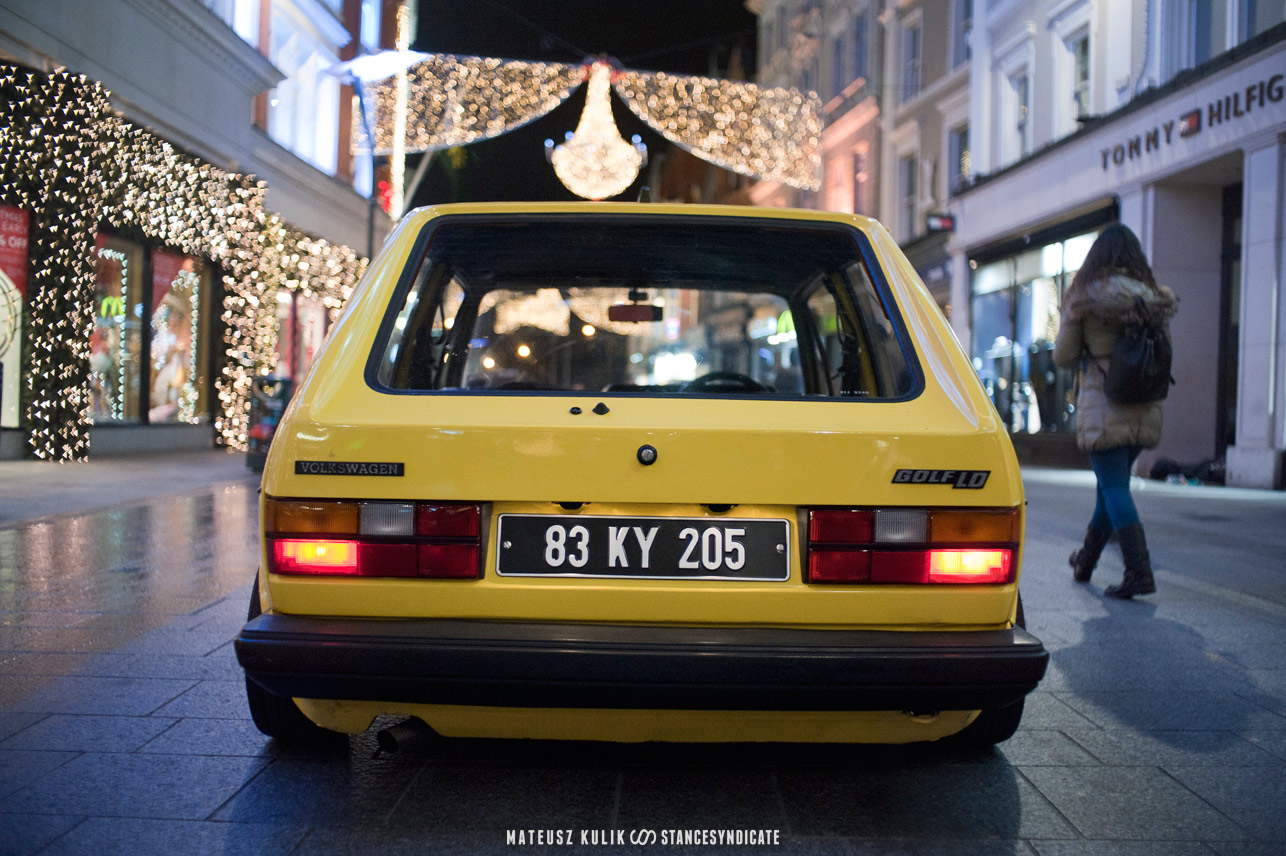 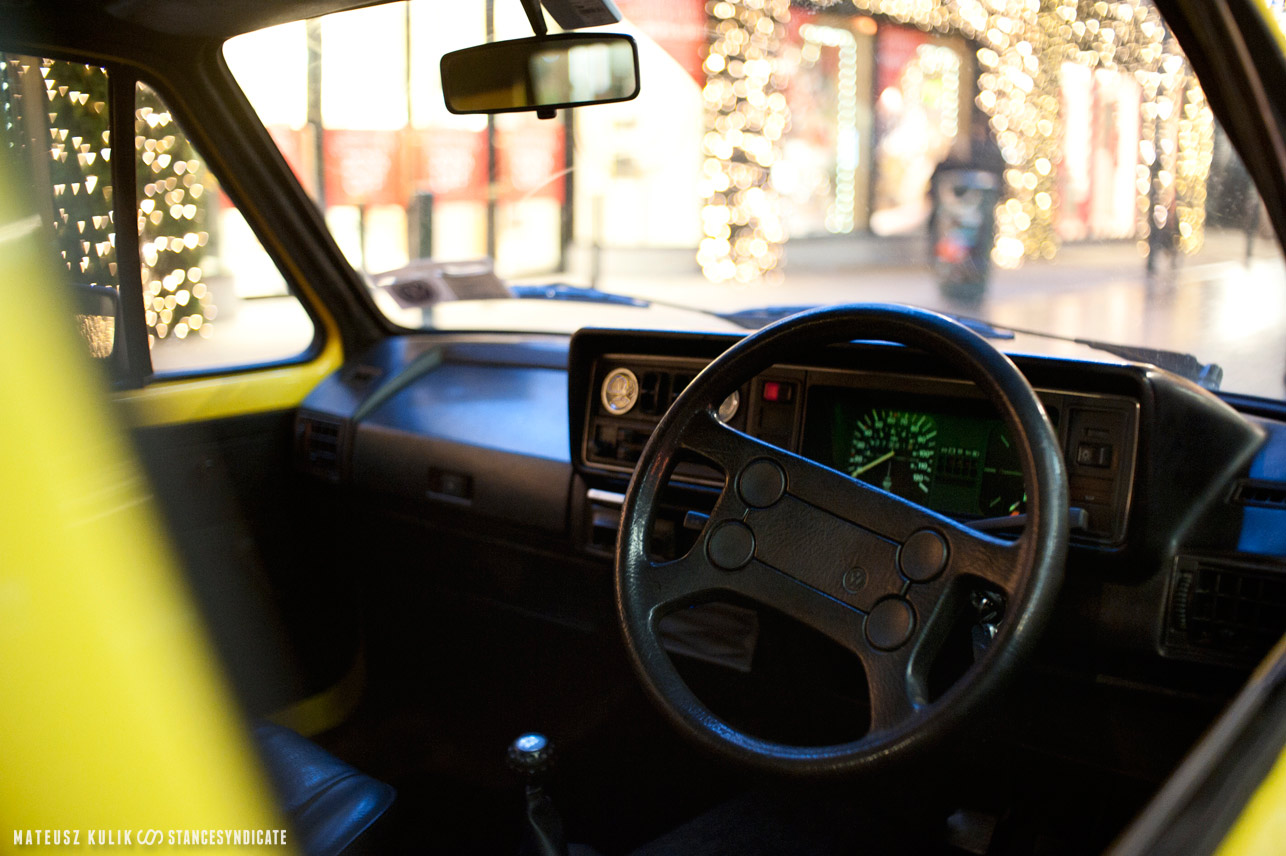 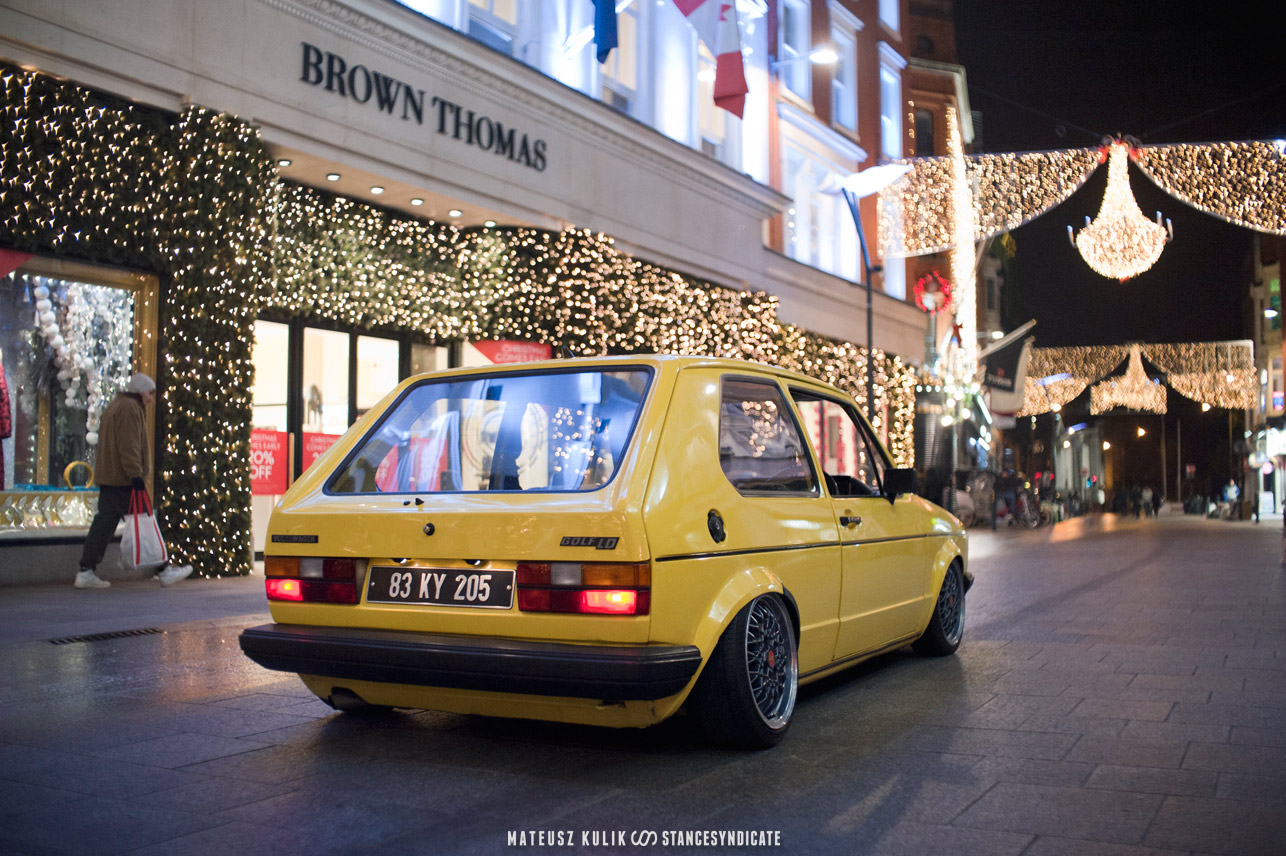 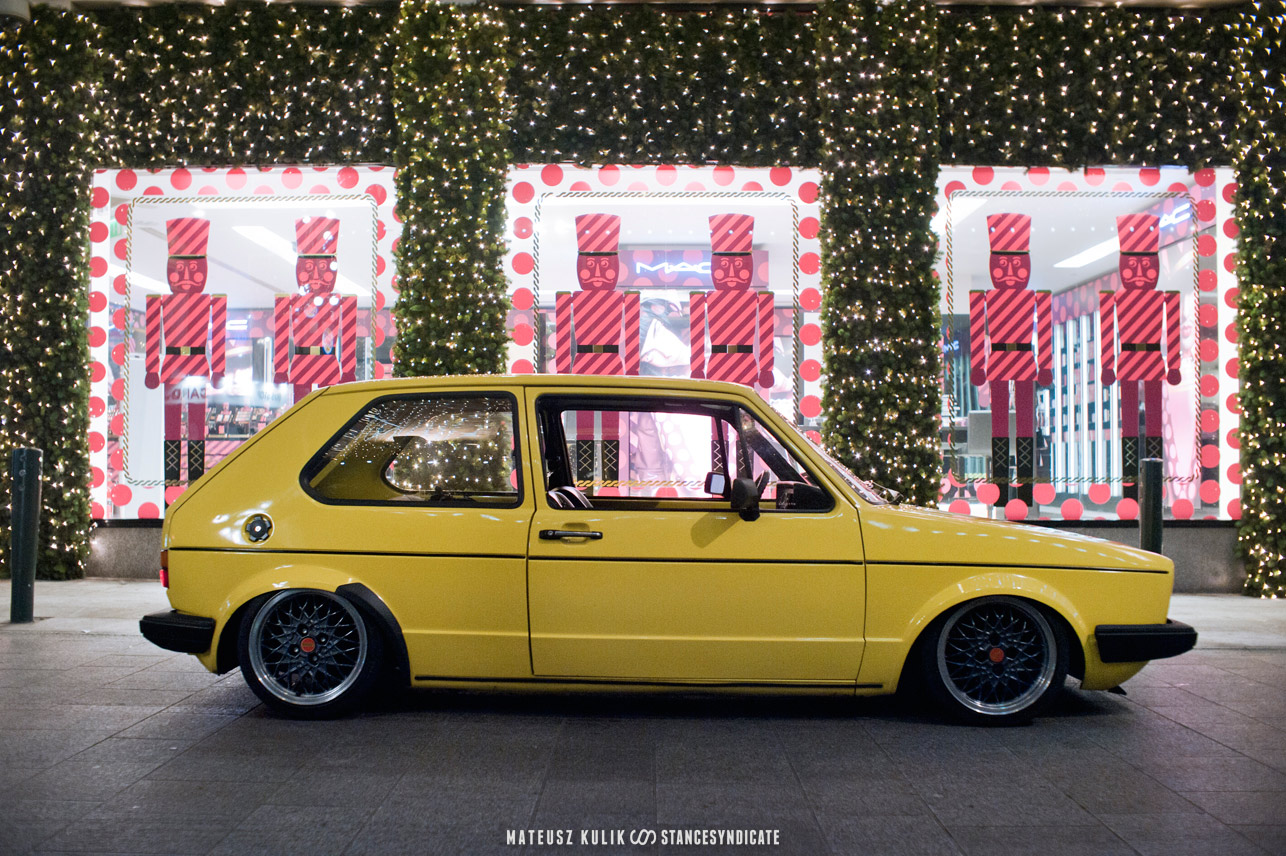