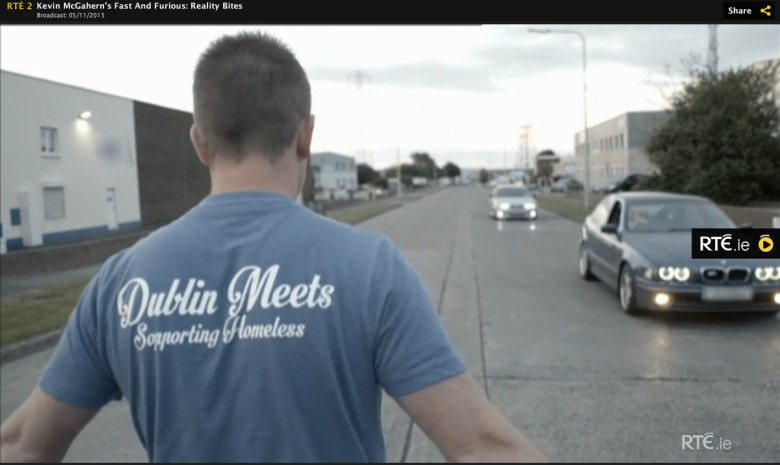 I’m just after watching your fabulous, fair  and clearly objective, insight into, what you named, the modified car scene. Frightening footage, fantastic job… a fucking propaganda. Pardon my French, but your work is far from being worth called documentary by which, shamelessly, you’ve labeled your latest television episode of Reality Bites. Far from reality, lads. Kevin McGahern’s Fast and Furious, although awfully true… I regret that your production is unforgivably biased and brainwashing.

I speak on behalf of the real car enthusiasts, not the joyriders you portrayed, but my friends and all the people who understand the real car culture. The love for cars and engineering, an automotive passion, a bond between a man and his metal. Kevin, or actually Peter and Katherine, it is a shame you did not do your homework right. Your research is poor and one-sided. Its outcome, your “documentary”, is harmfully subjective and brainwashing. Unfortunately your awful piece of terrible propaganda, of which Herr Goebbles would not be ashamed himself, with its carefully selected shots to convey the message requested by the brief, will not be soon forgotten and will leave a deep scar on the Irish car scene… at least among many who surely got concerned by your cheap production, now perhaps vigilant, about this illegal, dangerous and possibly alcohol and drugs filled, hidden world of the Irish youth.

Thank you. Now many of us who enjoy cars for absolutely different reasons than diffin’ dumb donuts on a “shlaaab”, which in fact is giving also a bad name to all real drifters are, thanks to just 50 minutes of your broadcast, put into the same box as that other crowd you called – the modified scene. I am not trying to say that we never hit the revs hard – cars are made for it, but you need to have some respect for them too. Youngtimers, classic cars and even vintage automobiles, also these cars do serve as basis for projects. Many guys, or sometimes girls, spend years finding the right parts they want for their build. Some parts are very precious, kept hidden away, stored in original boxes out of reach in secure places… while the cars are coated in high-tech waxes and ceramic coatings to protect their paintwork.

Now, thanks to your “documentary”, an average random Rory may think when seeing me passing by in my slammed Mk2 Golf that I will go diffin’ around the first cone encountered. Sure I would, but you see… its clutch is slipping. Sure, you got well prepared before taking your job, you know what I am talking about.

Great idea to play the viewer into letting a newbie, a total rookie who, as you had portrayed it – hypothetically, may not see the difference between alloy wheels and hub caps. However, our host is keen to learn, to absorb the new interesting culture he does not understand and has no views and opinions about. In this subtle way, the viewer is ensured that they are going to experience the most objective look at this intriguing topic – the modified car scene. Unfortunately, what the viewer receives… is nothing else but shocking propaganda.

Or maybe it turned out good for us that your research was incomplete, though it was very biased and aimed to hurt the Irish car scene. Why? I would be ashamed to have my car in this production, even my banger VW Golf Mk4 1.4 16v a.k.a Speed Daemon. Many of my friends, mates and other petrol-heads not only in Ireland, but globally, who are real car enthusiasts would feel the same way. I speak on behalf of those who felt hurt after your broadcast. We condemn your propaganda as we do the modified scene. But, it is a shame for you, fellow journalists. Your standards reached the bottom.