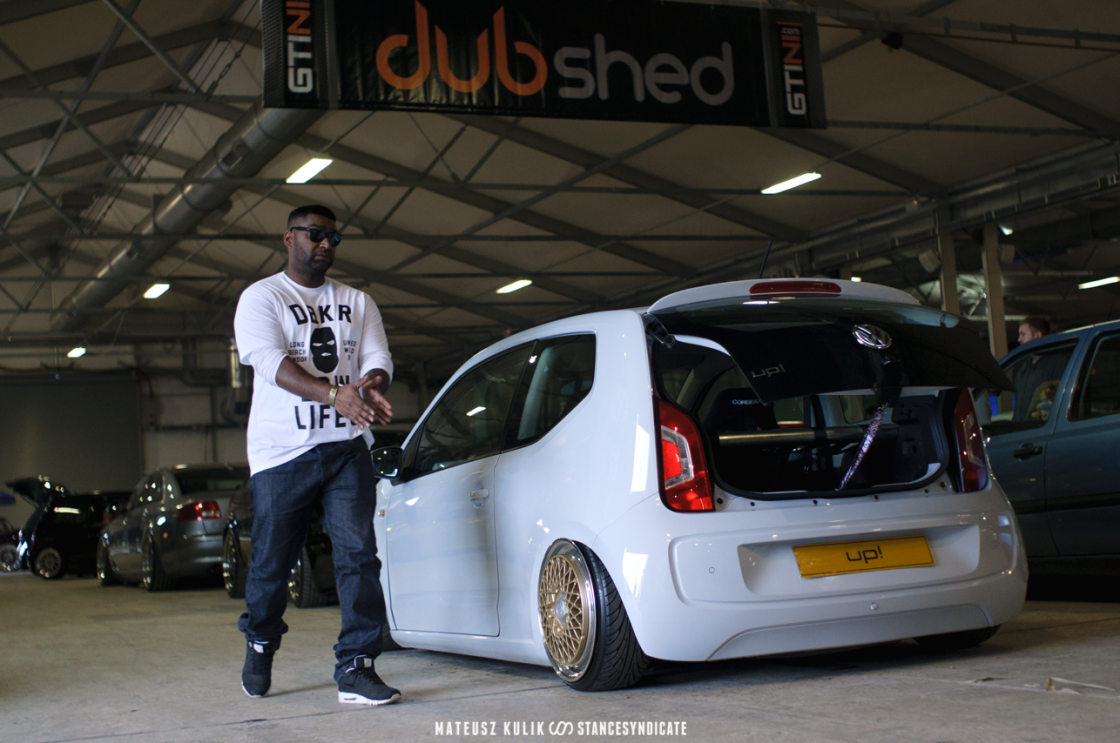 Two weeks of hard work to build the Mk2. Two weeks of crap food, lots of stress and “mechanic’s syndrome” – the never ending grease under nails. All this only to get the latest VW in my collection ready for Ireland’s prime VAG dedicated show – GTINI’s world famous Dubshed. A last minute build – #DubshedPrep #Manana.

I bought my “new” ’87 VW Golf Mk2 earlier this year and though she had NCT (vehicle test) certificate valid until the end of April I thought that it’d be better to have her fly through the test again before some essential modifications would be introduced. Ya know what I mean. Old Volkswagens never die. They simply get lower, especially when they’re tested for the next 14 months. Having the GL tested now meant only one thing – it’s time to get it slammed! 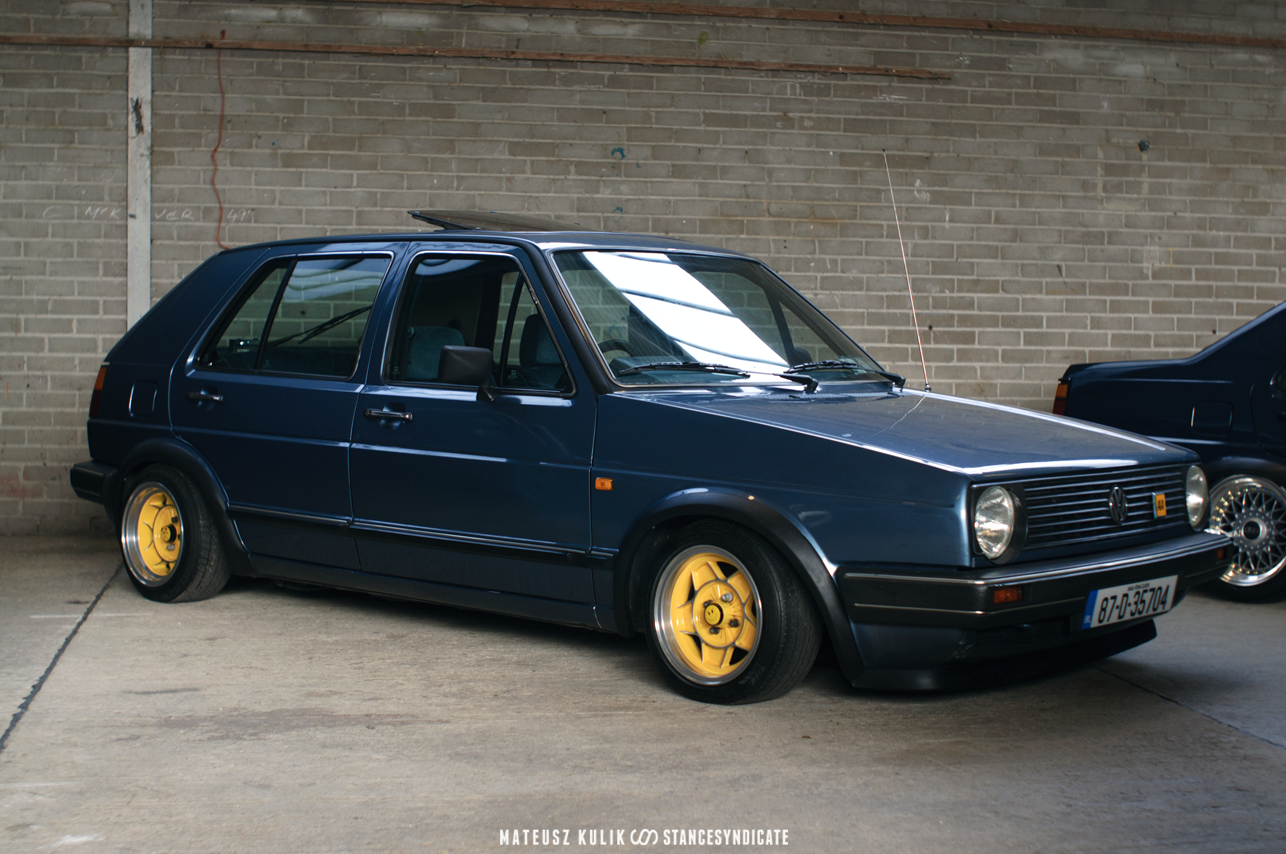 So I did with lots of help from Szymon who has handcrafted one of the best Polo’s on the island – his Tornado Red VW Polo Coupe G40 – built not bought, because anyone can buy a car, but only real men keep them old yokes alive (as I read in a meme found somewhere on the internet). I built mine too and finally I was on the M1 driving towards Belfast. The Mk2 was ready, but not exactly as I have imagined it to look for this year’s Dubshed. 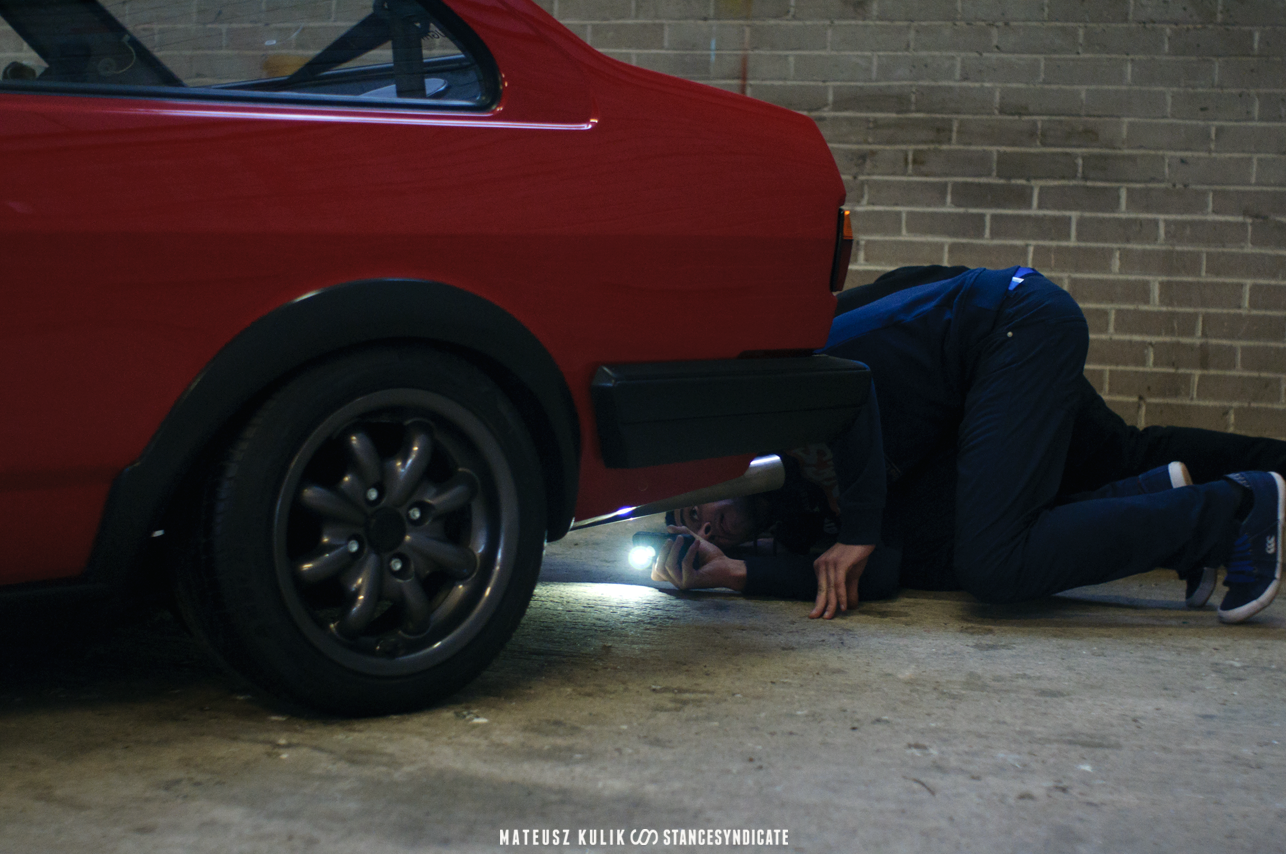 The too phat 9,5J BBS RMs could fit in the back but I didn’t feel like rolling arches so once again Szymon helped me out and borrowed me his yellow 13″ ATS Classics. Blue Mk2 and yellow wheels. Very well I thought! Both colours mixed together seemed to yield original StanceSyndicate green. Awesome! And… blue and yellow are to colours of my homeland, my heimat – Silesia – that’s even better, I thought to myself gazing at the 1,5m long wing-mounted aerial cut the air at 150 km/h. 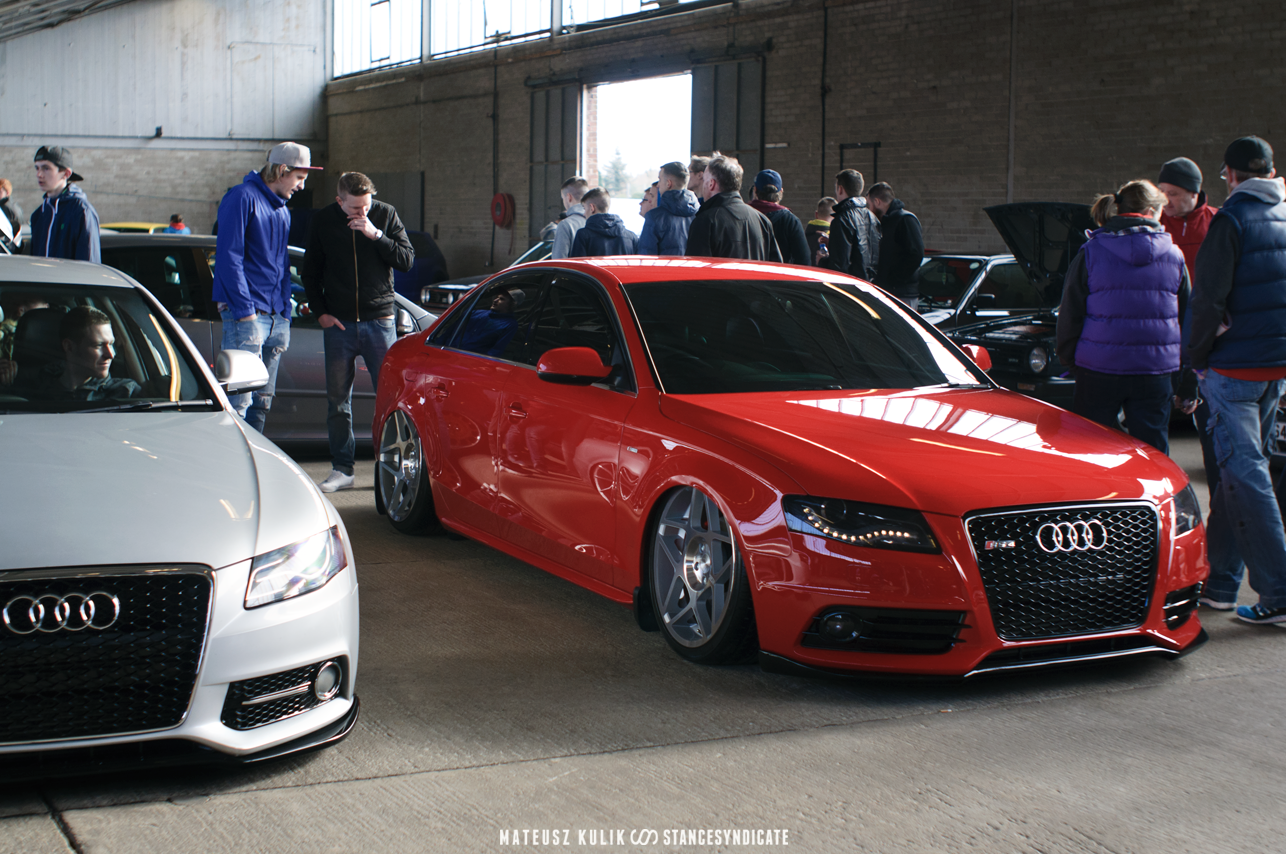 At this speed my Mk2 would be the fastest car on the motorway and quite likely no one would overtake me on my journey to Belfast but since my speedometer wasn’t too accurate and rocking 13s didn’t help either I was actually the slowest one but that was ok. It was just me, the motorway, my Stratos Blue GL and Breakfast Club with Right On Track on the radio. 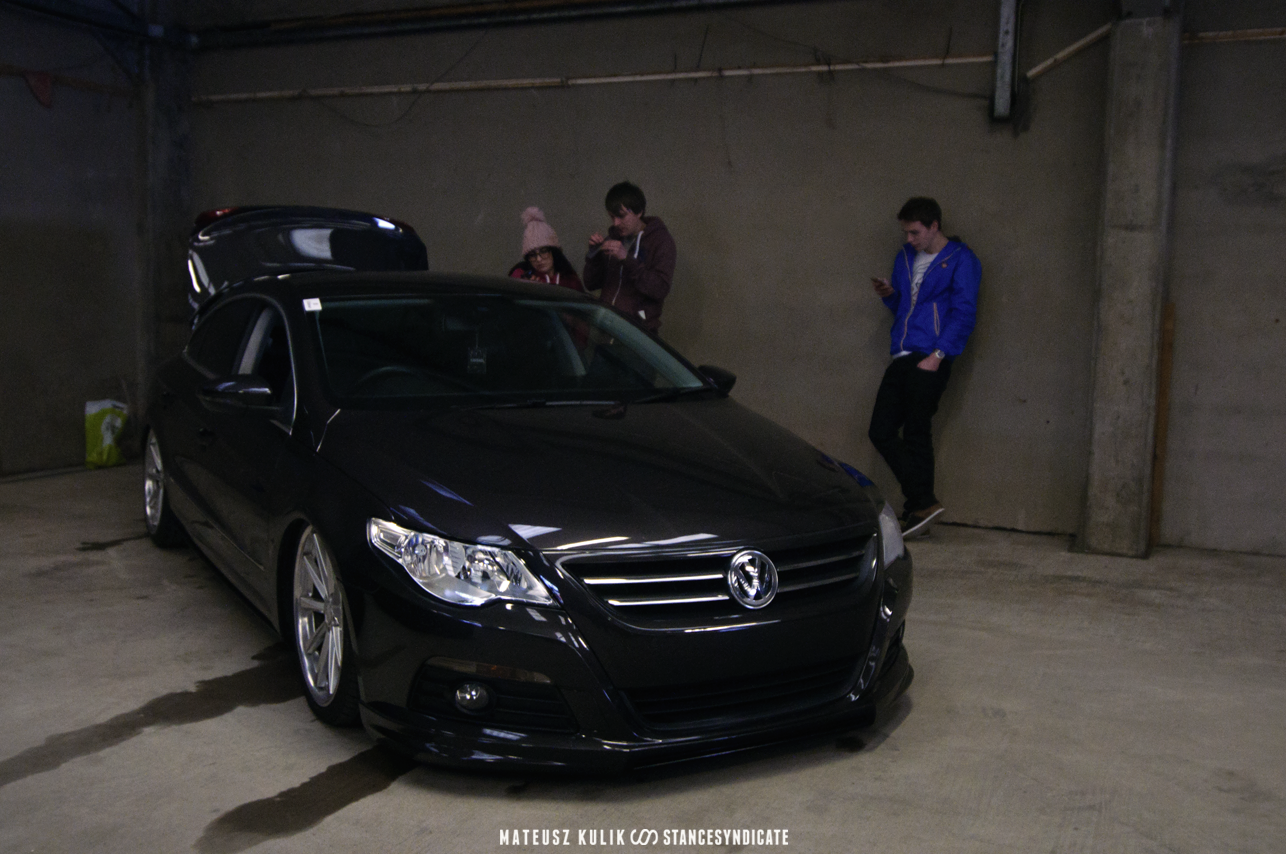 The almost 30 years old 10″ in-dash speakers played the 1987 pop hit just the way it should sound on board of an old Golf. The DJ on the radio knew what to put on the air for a guy who just renewed his membership in breakfast club. All the food I had that day was a chicken roll and lots of stress getting the Golf ready for the big weekend in Belfast. I wondered if I was right on track, ‘gonna make a move that knocks you over’ – they sang and I was about to do that later in the night. Belfast! 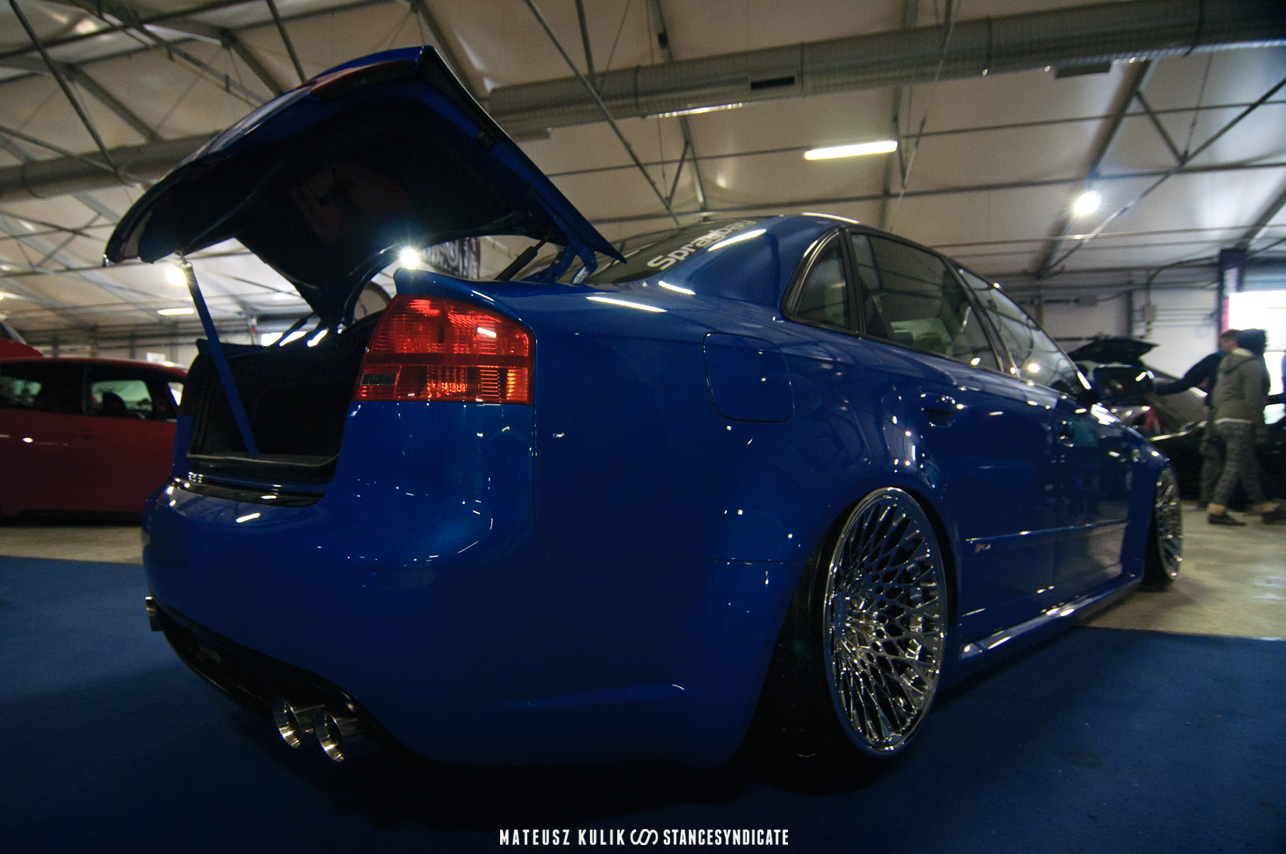 Blue Golf, blue velour seats, blue dash, blue trousers, blue jacket, blue shoes – everything blue. After just a few drinks and a few doobies my face turned blue too and the blue carpet in the hallway of the apartments we had at the Dubshed pre-party looked like the perfect place to blend in. Last season I thought I’m invulnerable. I even tried to consume half of periodic table at once and I was still alive. 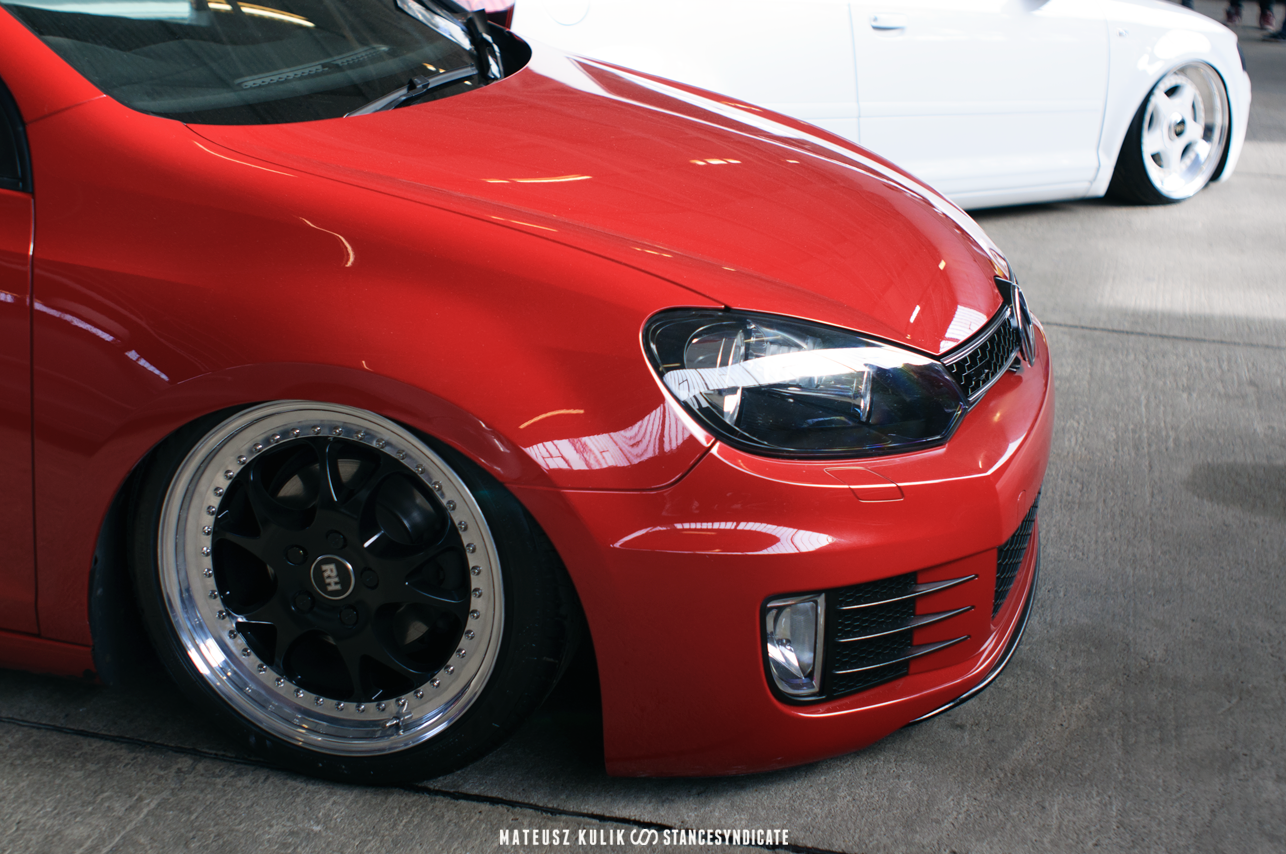 Not this time. K.O – you’re drunk, go asleep strategy had to be put in place. Belfast, Buckfast or maybe Bełtfast? (pol. bełt – to eject the contents of the stomach through the mouth)… but that wasn’t the end. After 2h hour nap I was back for more drinks at our hotel’s reception and it was good, very good… the receptionist put some old-school Polish rap on and we stayed up until early morning drinking bottles of Budweiser and Stella Artois. 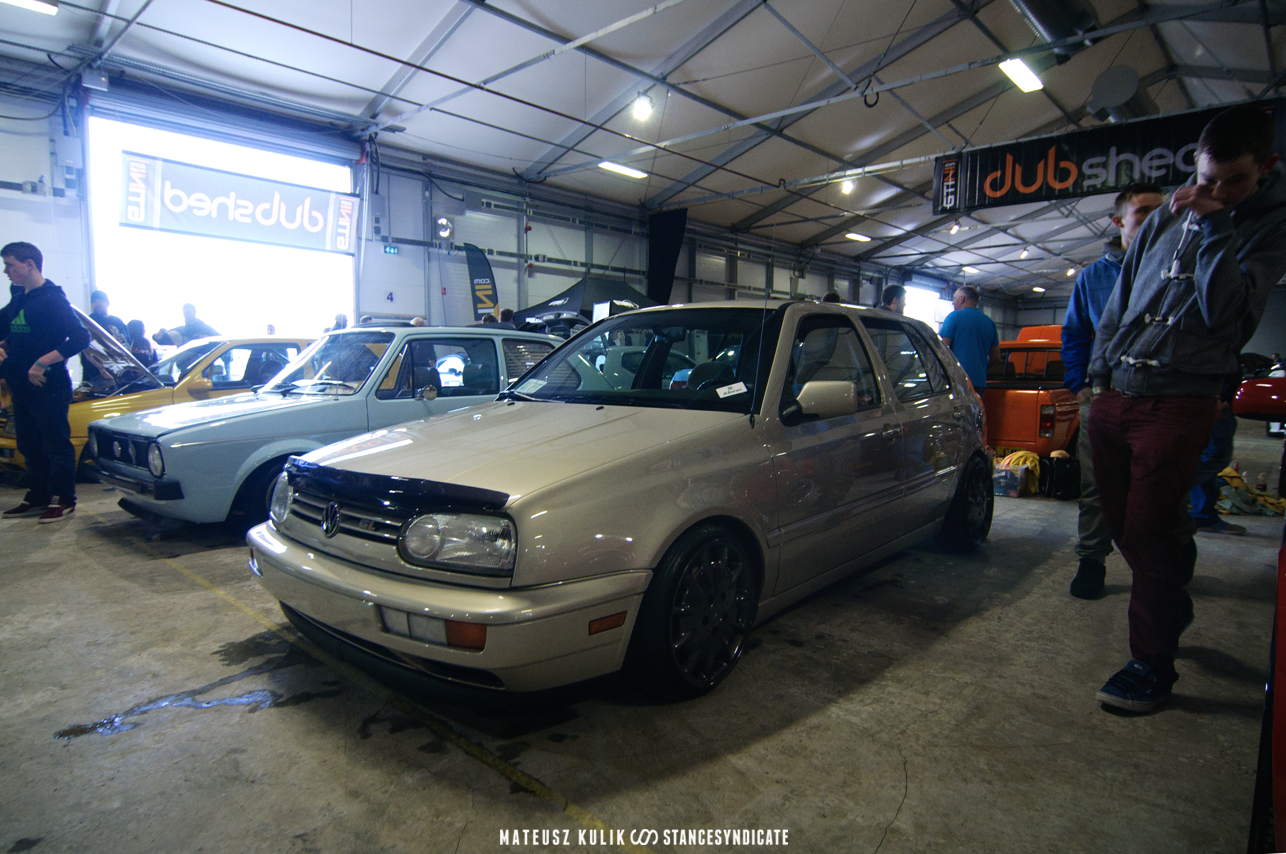 The morning after wasn’t too pleasant but the view of top dubs from all around Ireland queuing up for Dubshed re-energized me really fast. I took me a good while to get through the gate with my Mk2 and we were put on hold with chances to get indoors. Great I thought! A few days earlier one of the main guys behind this awesome show, Gethin, told me to bring her over and we’ll see if she’s worth to get indoors. Gethin, can I get in, I thought and I pulled up beside Aidan’s stunning yet so simple early Jetta Mk2 on BBS RMs. 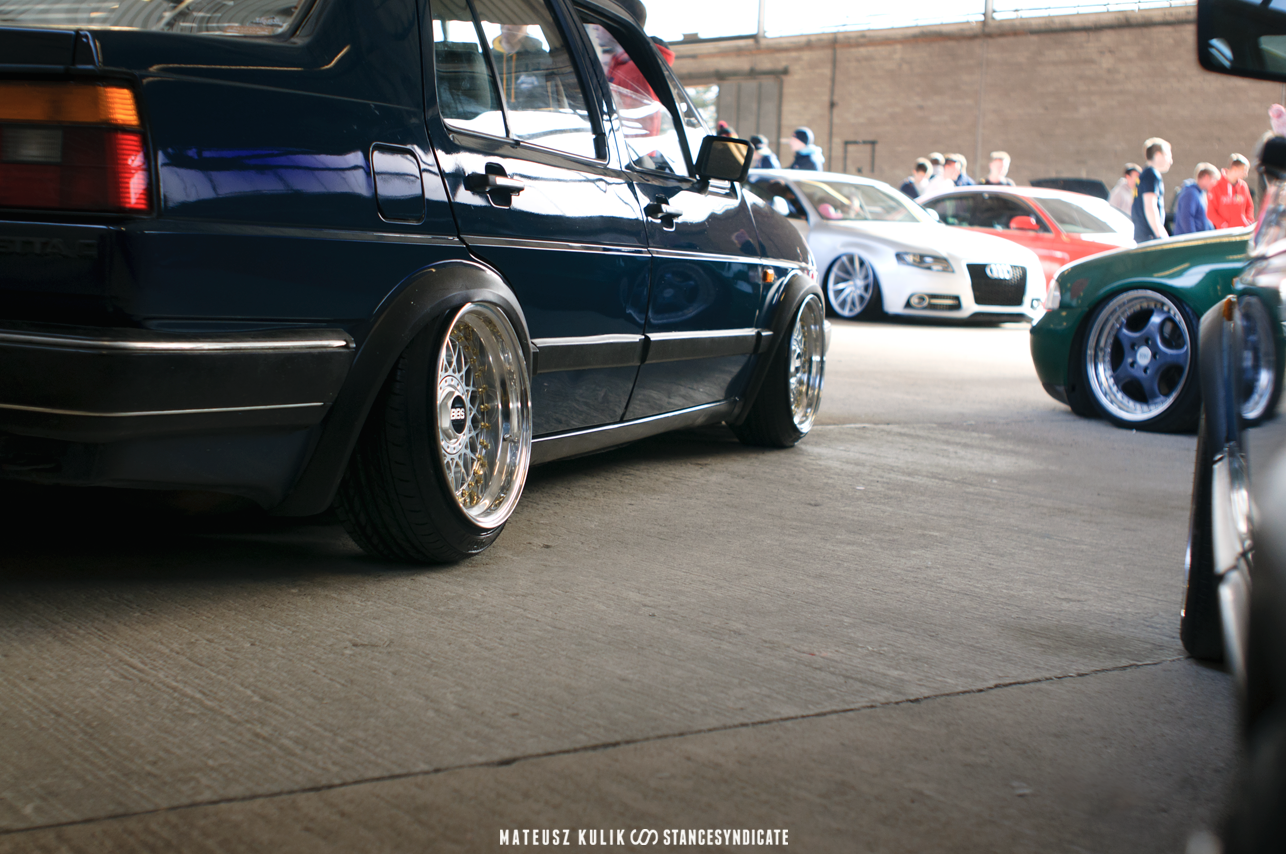 I can never get enough of this car. Its paint isn’t the best, it’s actually far from being perfect but I think this only adds to this project which in my opinion is one of the best Mk2 Jettas in the country… right after TJs out of the league big bumper, supercharged VR6 Jetta on Rallye-front. When Aidan moved indoors I followed up and we took a saucy spot in my favourite “shed” with lots of flattering daylight shining through the big windows high up in the walls of the building lighting the cars parked inside. 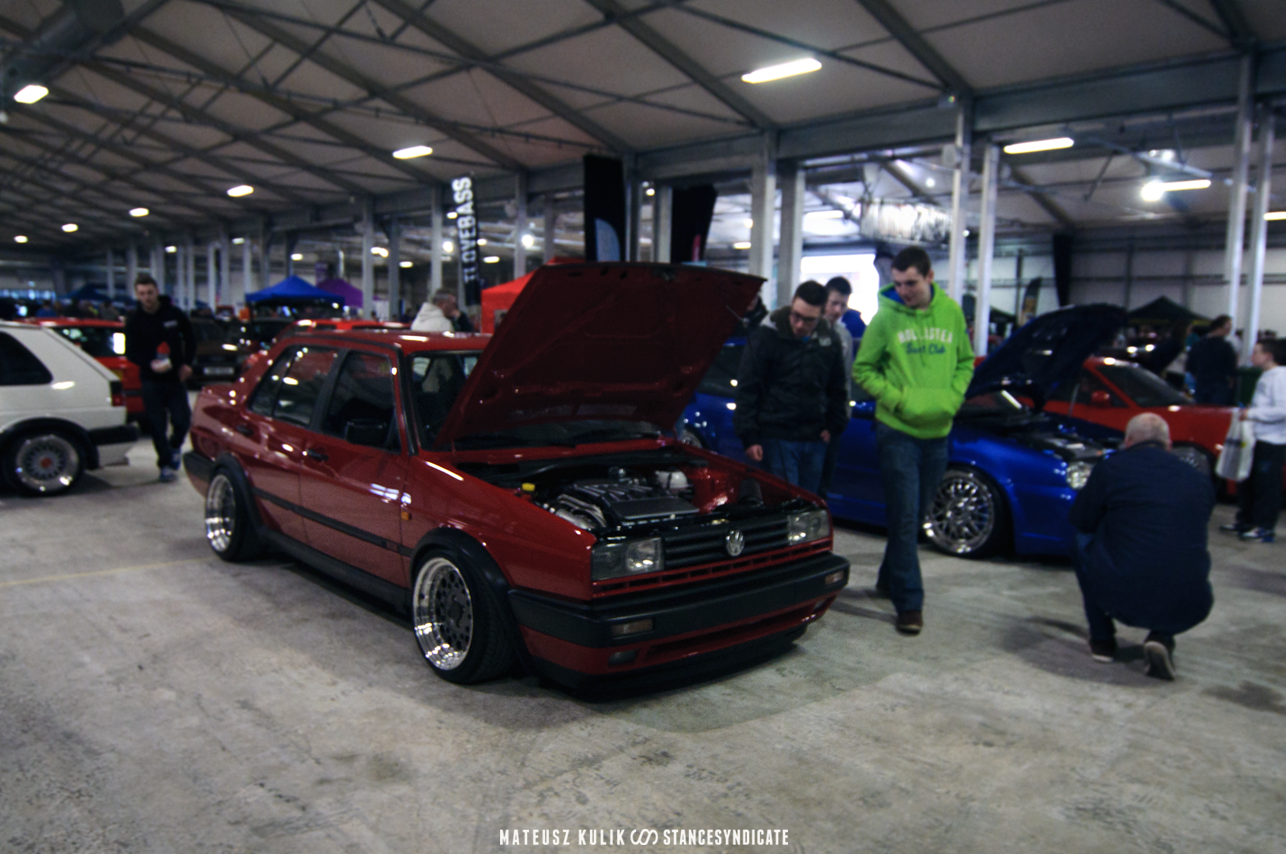 Later Aidan told me that a lot of people would come, take a quick look at his bagged Jetta and head over to admire my Mk2’s blue interior… WIN! I haven’t had a car on show for a while and seeing all these people enjoy the last two weeks of hard work felt great. Anyway, I didn’t submit the car for the show and shine contest. I wasn’t there for the show and the cars only. Rather to see all dub-mates after winter break and to have awesome time! 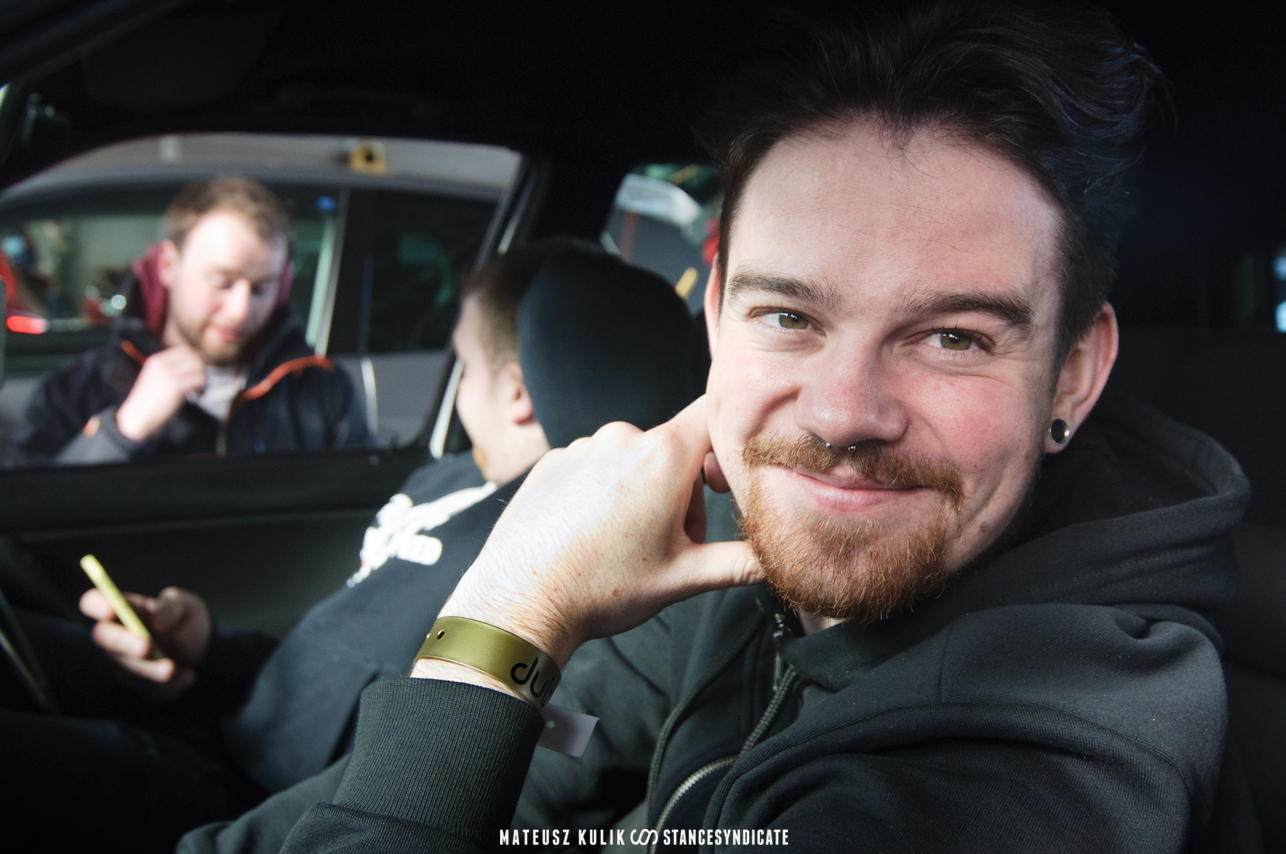 As it usually happens, I didn’t take too many pictures at Dubshed. First of all it was too big, though slightly smaller in numbers than last year, but still good and the standard of cars was definitely much higher. Again many cars took a boat across the pond to come over here from the UK to join us at our prime VAG dedicated show. 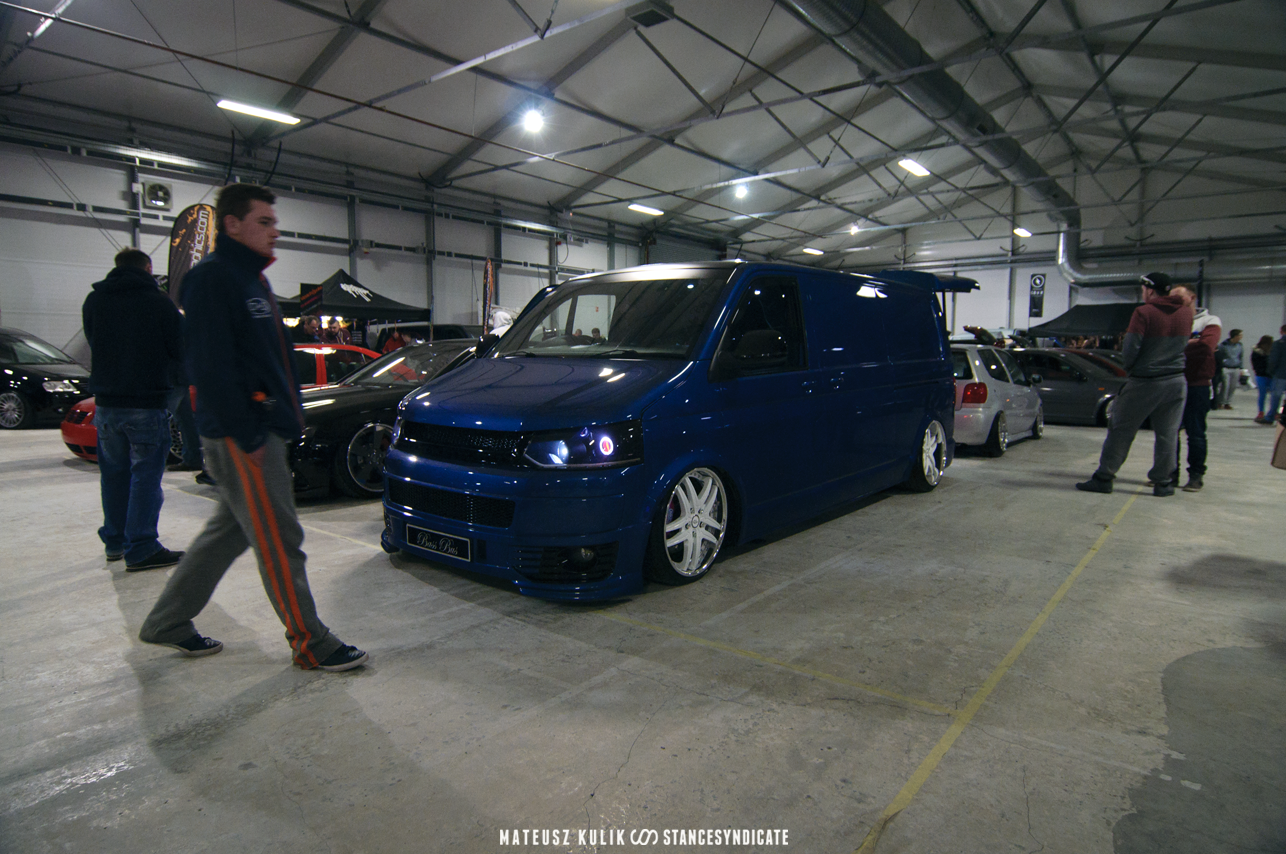 Usually it’s us who from here in Ireland, sail across the Irish see to the shows in the UK or… in the mainland Europe. But there’s no need to do that anymore if you want to enjoy an awesome show here! After 6 years of Dubshed our local scene got really close to European standards. For example, this year I really enjoyed the standard of Mk2 Golfs. I might be a bit biased (yes I do love ’em Mk2s) but a few other people also confirmed that plenty of new Type19 projects have suddenly appeared out of nowhere and most of them were absolutely awesome! Save them old VWs! Keep it up lads! 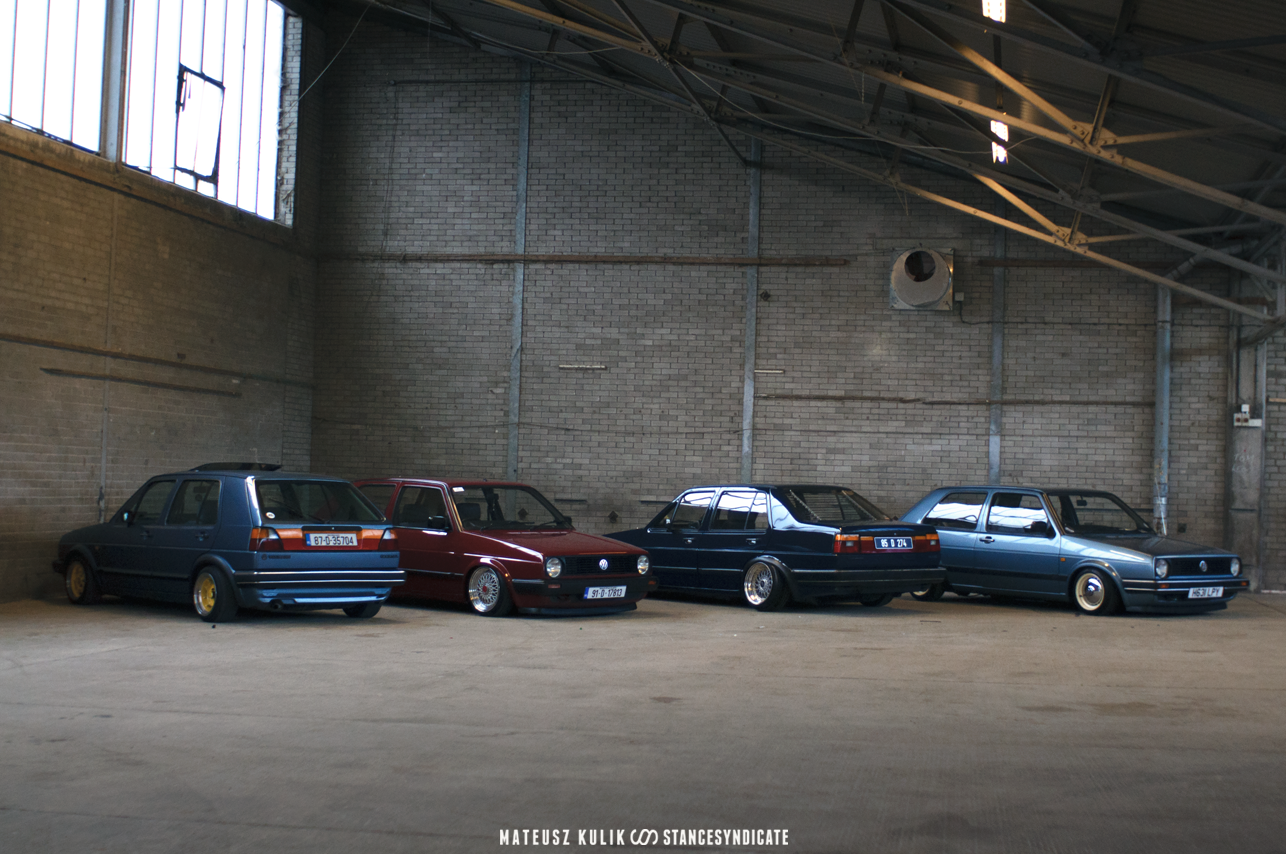 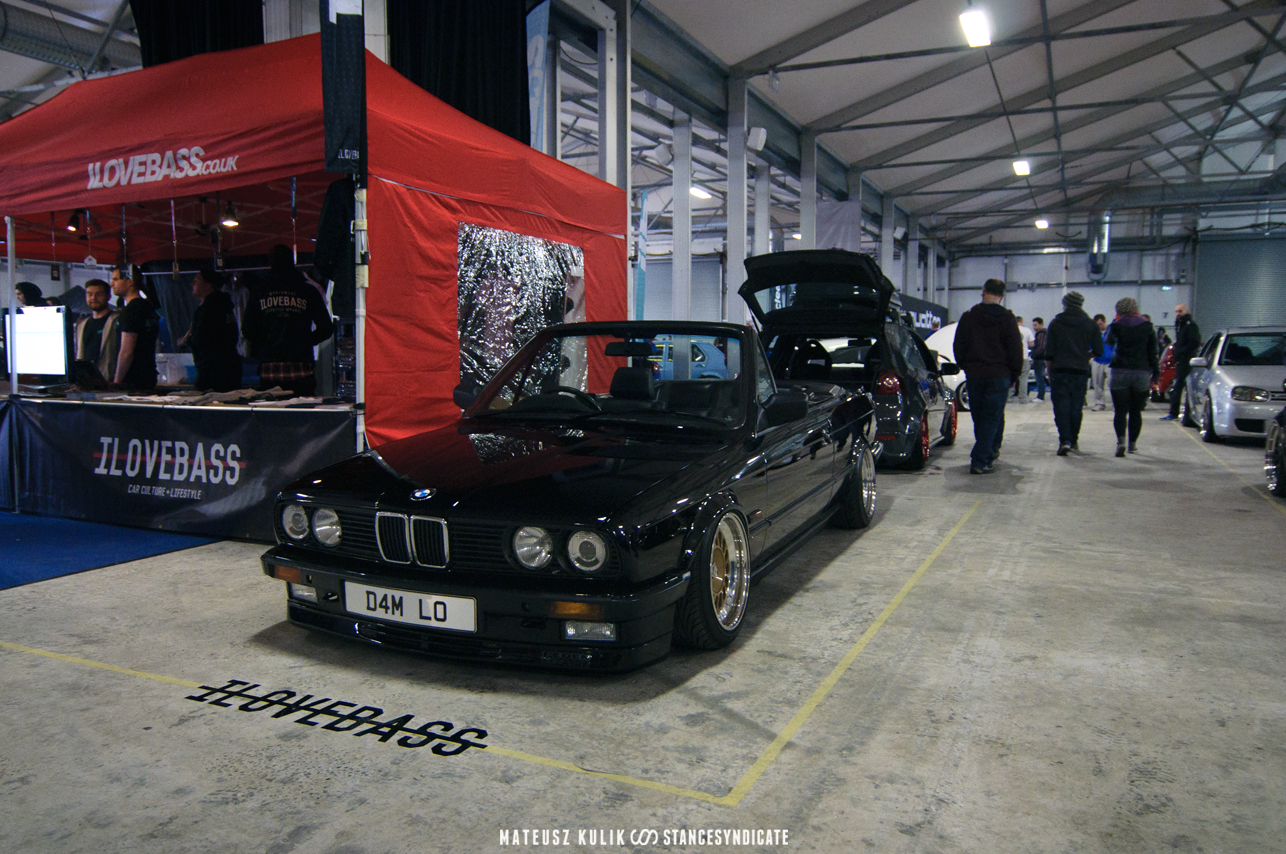 All these cars are awesome, I love them… can’t live without them but after 10 years on the scene cars are not everything. What counts the most is the chance to get together with like-minded people to spend quality time and to collect some priceless memories, drink a few pints and scent the air with a bit of Jamaica. Dubshed is the best place to do that in Ireland. From last year it’s the only show that is held over two days effectively turning it to a weekend-long fun with mates! You can’t go wrong with it! Even in case of K.O! Until the next year and now – let’s go to Wolfsgruppe BBQ to do the same with my Polish and German friends! Fucking yes! To the orbit and back lads! 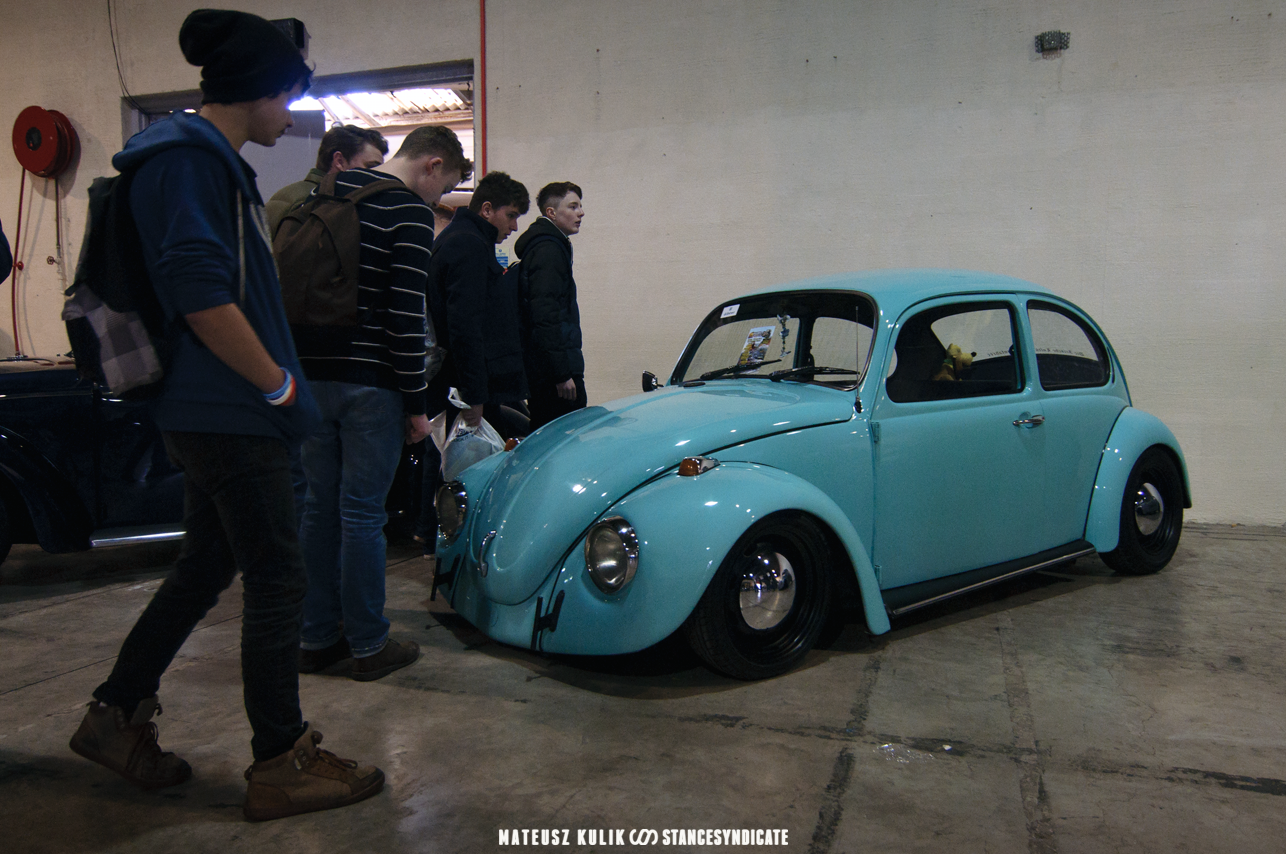