Recently redeveloped St.James Gate Brewery shone expensively lit by the famous Irish overcast sky. It’s modern cubic architecture only slightly invaded the west end of quays fitting it just perfectly, almost unnoticeable, beside 1846 built Heuston Station and opposite to almost 150 years older Collins Barracks, the home of The National Museum of Ireland… I’m quite sure that any visitor to Dublin will definitely remember to grab an eight-pack of Guinness on their way out of the country after seeing the new brewery. Though not cold, they’re available at all duty free shops.

We wanted to get to one of those shops on board of our luxurious, vastly too expensive to board, diesel-powered vessel as soon as possible. Bombel revved up the 300bhp 1.8T hidden under bonnet of his Seat Leon Cupra R. The exhaust roared spooking all squirrels in the vicinity and blow-off immediately followed in disappointment. The car didn’t even move for an inch. We were stuck in a traffic jam admiring the shiny gold-glittering Guinness logo. For a while I thought it twinkled like Joe Pesci’s gold tooth in „Home Alone“… Wet bandits!

It was 7pm and we were supposed to meet in Dublin Port with the rest of #24hLeBags team an hour earlier. We were late. Business as usual. No matter how long you could be planning things, you always might end up late. The night before our road trip some bad news came on Facebook. „Guys, I’m sorry, but I won’t make it. The car isn’t ready yet… I’m not going“ – wrote Marcin. He was building his VIP Style Lexus IS 220 for the last few months and now some minor, though very important, details didn’t match. An emergency Raceism United team has been assembled and dispatched right away to help him finish the car. That’s what you call a real community!

After a snail-paced ride along the Liffey and a few moments of revving up, because Bombel couldn’t simply resist from stepping on the pedal, we’ve finally arrived in the port. Tony and the rest of the crew were waiting at Topaz petrol station, our meet-up point. His bagged Audi A6 Avant was also there and her front-end covered in blue tape, to protect its perfect paintwork from stone chips, seemed to be suggesting readiness for the trip. The A6 indeed was ready, as well as Bombel’s Cupra was, but we were missing the third, last front-end-taped-up car – Marcin’s VIP Lex. It was late, very late. We should be literally now queuing up to board the ferry to take us to Holyhead.

It took him all night to get her ready but, thankfully, Marcin was now somewhere close to the port. That was great news, but the bad news was that we had very little time left and I wanted to do a documentary project on a chunky medium-format Mamiya RB67. I thought that 25 years of so called Polish freedom and 10 years in the EU would be a perfect background for our road trip and a fair reason to bother with additional 1,5kg of boxy luggage in a form of a film camera. „A very good reason, a historical moment that won’t happen again“ – I thought. Mexicans of Europe. Ostblock Latinos. Coming back home, all the way over from far Ireland. Bringing three top class cars to two the most awesome Polish shows – Raceism International Stance Fest and Wolfsgruppe VAG Event.

There was very little time left so I quickly loaded the RB67 with a roll of 120 Kodak Portra film. Having only 10 frames on each roll I knew that all shots had to be very precise, just bang on. In Dublin Port, where #24hLeBags 2014 started, I had planned to take a few simple shots out of which the most important where portraits of our drivers capturing the excitement and joy prior setting off on this epic road trip.  By the time I shot Tony and Bombel a wild sick-cambered deep-dished Lex appeared. „Good“  – I thought – „Just one more portrait, a group photo and we’re good to sail across the pond“.

Simple two minute job. Quick light reading, two snaps and it‘s ready! In my dreams… As I was about to get the last two shots Cordell Walker in a filthy Toyota Land Cruiser flashing orange lamp pulled in. „You can’t be taking pictures here“ – he said – „You need two separate permissions to photograph in Dublin Port“. What? „Malarkey“ – I thought and pulled out my press pass. „Here, Texas Ranger, officer, mademoiselle“ and I explained to him what we were about. But he was too concerned about the duty and the very important task he was assigned with. He was on a mission and explanations that no part of the very strategic Dublin Port will be shown in my photos didn’t help though all I could see through RB’s viewfinder was our drivers faces and the sky, as I shot from down below for a certain artistic reason.

„OK, fuck your man… Here, Marcin“ – I said in Polish and called Marcin over to the same spot where I shot Tony and Bombel to take the last missing portrait, simply ignoring the man. Although I tried to explain the eager officer that yes I agree with what he says and why won’t he just turn around, leave for a while and by the time he’ll come back I’ll have the job done. Simple, he would have done his job and have us warned, but we would have ignored it and on time left so this would be no one’s fault. No harm right? And his precious job not threatened by a disciplinary warning from an another brainwashed muppet above him watching the poxy CCTV. But now this muppet started to threaten us that he’ll call Garda… I couldn’t risk getting the boys in trouble and finishing #24hLeBags before it even started. So I just turned around, ignored the jabbering „warden“ once again, shook hands with whoever came to say goodbye to us and we got into cars to get them on board of our vessel as soon as possible. My project was ruined. Cordell Walker Texas Ranger to ensure we won’t mess around anymore escorted us to the very ferry.

Before the trip I got a little tattoo on my arm. Three mystical letters written in Cyrillic. Maybe Mr. Walker thought that I’m a Russian spy taking detailed pictures of the port… like they wouldn’t be available on Google Earth. Hey you! Wake up ya bambaclad and get yourself a real job! See, Cordell got me a bit frustrated, cause it cost me a lot of time to prepare this project that he jeopardized in seconds. „Fuck it“ – I thought. It could have been a quite interesting documentary work but there’s no point crying over spilt milk because we were just boarding onto our ferry and we were about to spill something else.

Boarding a ferry isn’t easy if you drive a lowered car, sorry, a decked yoke. So to make things easier we always ask to put our cars on trucks deck. This way our deck-munching cars could be saved from climbing to upper levels of the ferry what could result in a departure delay due to some modified vehicle getting stuck on a ramp leading to the passenger vehicles deck. That wouldn’t be fun and we always warn the staff of such possibility so that they won’t have to take the responsibility for getting the ship delayed and thus losing millions of precious copper coins for Stena Line or other big white boat company.

Finally we got on board and immediately occupied a cosy lounge. Ferries are quite interesting devices though at most of the time dead boring. They feel like a mixture of a two star hotel and a cheap casino with a hint of  a morgue. Powered by a monotonous diesel and filled with silent dead-like faces. Sleeping corpses scattered in “hotel’s” lounge. Snoring. Breathing. Sometimes farting. Only kids are running around playing their games among bored to death bodies of supervising them adults. Three and a half hour with zombies. „Should we get a bottle of something nice“ – I asked – „just to moisten lips a little bit“. I didn’t have to say it twice…

Tony’s Audi A6 was my selected #24hLeBags car. Its brown leather seats and plenty of leg space seemed inviting to try on some brown liquor during this boring, flat sea sail to Wales. Jack Daniel’s was our choice. A little one liter bottle vs. the A6 crew, excluding Tony, the chauffeur. Seba, our radio operator, blessed the bottle with a holy cross, opened it and filled the empty Pepsi paper cups with golden Jack. Andrzej, who took the role of pillow specialist (sleeping most the trip) and myself, the journalist, we have soundlessly clinked paper glasses and sipped on the whiskey saying „Na Zdrowie“. Though Andrzej isn’t Polish, but Lithuanian, he speaks better Polish than some Poles. Anyway as the pillow specialist he didn’t need to use the lingo much.

After a „glass“ or two, other Seba, Seba #2 – Marcin’s Lexus IS 220 navigator, joined us at the table. After third, Seba #1 decided to actually join in too having checked with Tony that he won’t be required to switch him behind the wheel. Soon the bottle was gone and we didn’t even feel drunk. It must have been the fresh Irish Sea air that we deep inhaled on the smoking deck admiring the views of open sea and chatting away. The morgue atmosphere went away and now we were in a cheap casino sailing to Holyhead, enjoying the no longer boring trip.

On trips like this beer wouldn’t be a good idea. Drinking it instead of whiskey would turn any road trip to a motorway toilet facilities audit, unless you have a steel bladder or fancy a big nappy. We were about to arrive in Holyhead and bladders had to be prepared for a few hundred kilometers of driving across the UK. In jacks, while watching the gold stream of digested Jack I heard an intriguing sound in the cabin beside. The machine has dropped the winnings! And it wasn’t what you’d expect to be dropped in a toilet cabin. I looked at the ground and saw dark toned hands collecting the dropped loot. Jackpot! Handfuls of sugar and salt packets nicked from the bar. He was the winner!

So were we! The voyage across the sea on board of the big white boat turned out to be very good and not boring at all, even quite entertaining at times. We got down to our cars. Drivers started the engines. Bagged Audi A6 and Lexus IS 220 without any trouble drove over fingers connecting the ferry with the land. Bombel’s static Seat Leon Cupra R also disembarked easily. We were good to go. Hello Wales! Hello #24hLeBags! The road trip was about to begin! 2 454km+ across the EU! 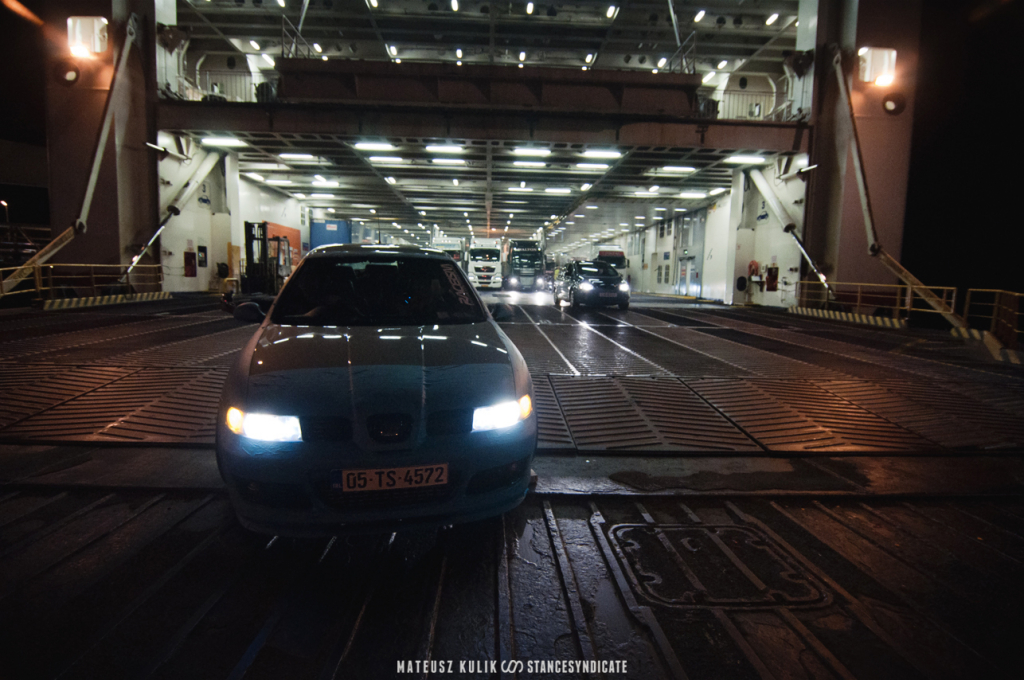