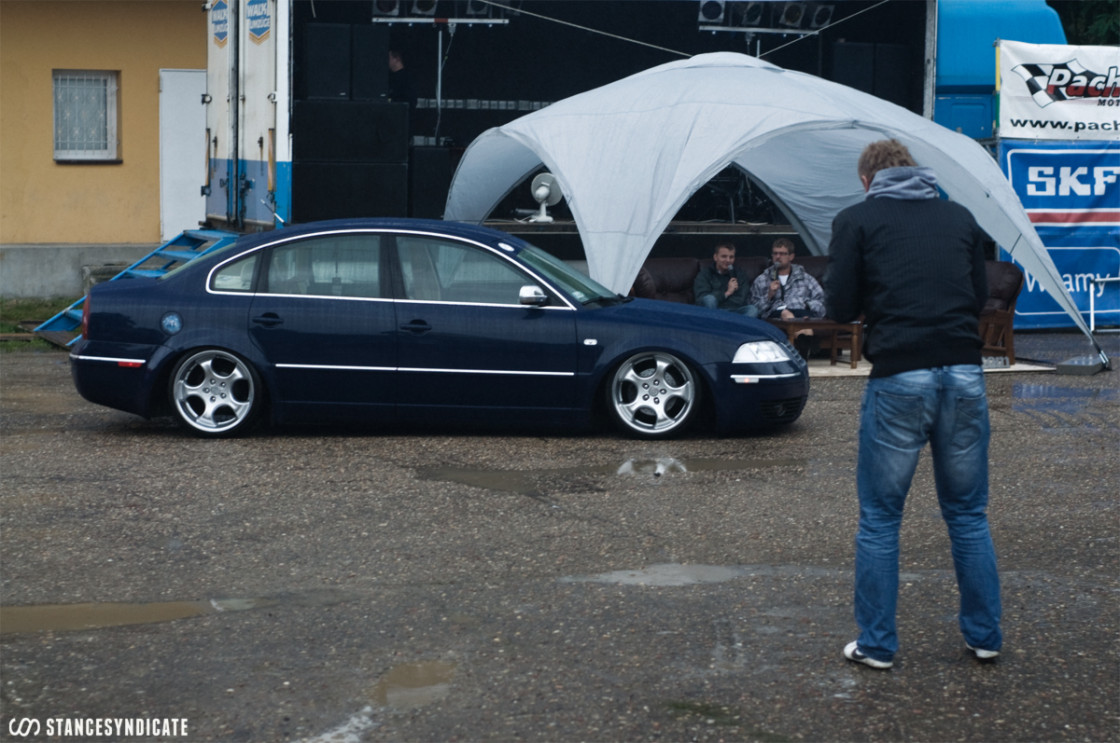 Never been so broke in my life and never been aware that there is so much money actually available for all of the desired things. Just know what you want, believe in yourself and… make it happen. Anyway, getting broke process has started with our trip over to Poland for Wolfsgruppe’s VAG Event in July. Today, I flew over again to join the crew at Wolfsgruppe’s BBQ this weekend. 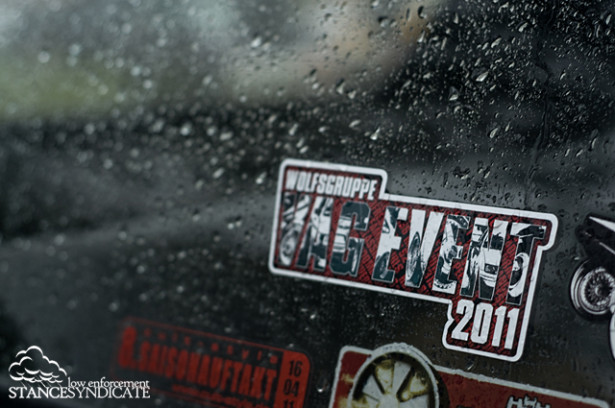 Before we’ll bite into grilled Śląska sausage at Wolfsgruppe’s BBQ this Sunday, I’ve decided to write something about their recent edition of VAG Event that took place during the first weekend of July. After this year’s MIVW and Edition38 I’ve a good base for a comparison. 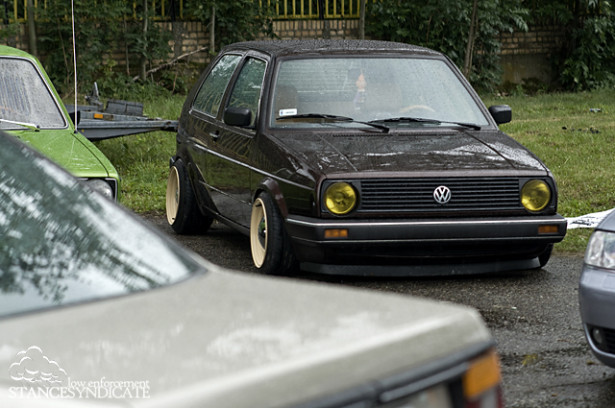 Well, there is nothing to compare really. MIVW, Edition38 and VAG Event are all totally different shows, but all have a few common things: VAG’s, OEM+ and great atmosphere. I’ve enjoyed all three shows, but only VAG Event has that little something that puts it on the top of my list. 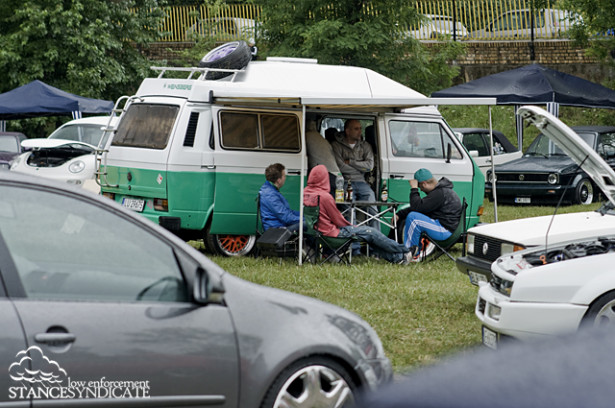 First of all, VAG Event is an invite only show, so in case you’d like to come over for the 2012 edition you’ll need to apply for admission. Of course, you’re always welcome to visit, but if you want your car there with you – make sure you’re building a show stopper according to rules of the OEM+ game. And please note, that if you’re main source of modifying elements come from Halfords… bring your car to the nearest scrap yard instead. No one cares about your pink Minxy wheel cover. 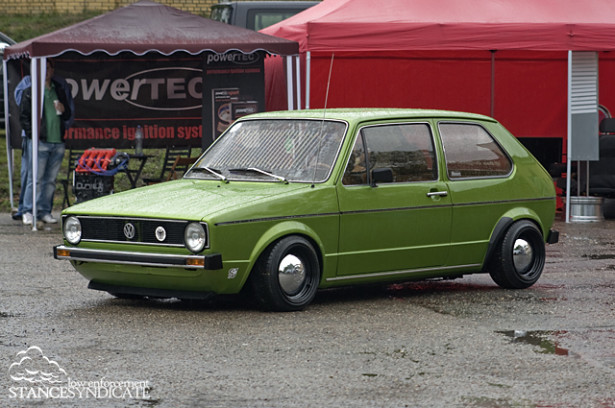 I’ve been invited for the first edition of VAG Event during Worthersee in 2008, but never got a chance to actually take part in this great show until this year’s third edition. Unsure if my Corrado would still meet the high Wolfsgruppe’s standards I drove over to Żerków in Poland after a few days of getting her ready for the big weekend. 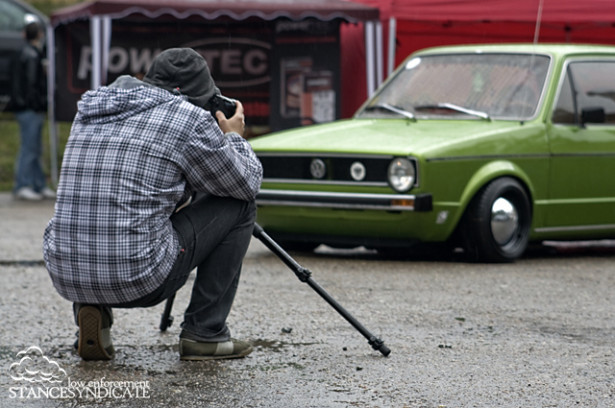 It took us a few hours drive to get there. But finally, we’ve arrived at the entry gate with an expired invitation in hand. “Oooo! Zuko, you’re alive! Haven’t seen you for a while now” – greeted us Speed from Wolfsgruppe. My invitation expiry date has been extended and we were let into the show grounds. “Come on, don’t be taking pictures of my ugly face” – I said to Loniek who was also there at the gate working hard with his camera. 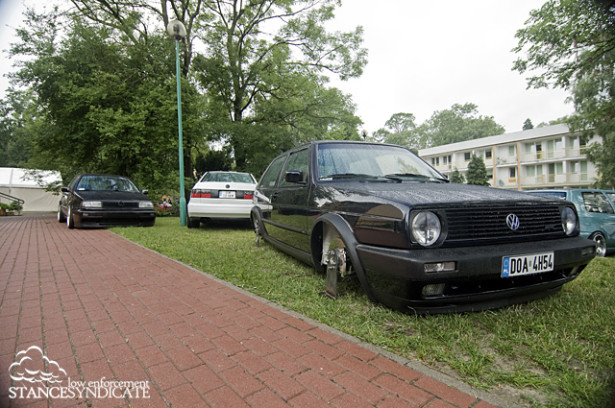 “Mmmm.. nice!” – I said to myself when we drove past the gate welcomed by Bestia’s PVW featured Mk2 VR6. The event takes place at a kind of holiday/conference centre with a few accomodation blocks, restaurant, pool, bowling and billiards venue as well as the main show ground… and what about all the VAG’s? The cars were parked literally everywhere stuffing the ambient with a very eye-pleasing views. A really nice scenery. 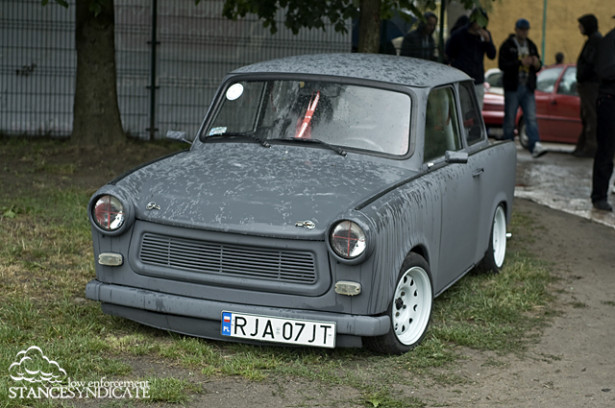 Why? Imagine a situation. You wake up, get out of the bed, grab yourself a fresh coffee and have a fag to go with it. Sounds like an usual morning, doesn’t it? Well, now go out onto your balcony and admire these awesome cars parked just right below. Does it make a difference now? Or morning with a low riding Trabant is your everyday routine? 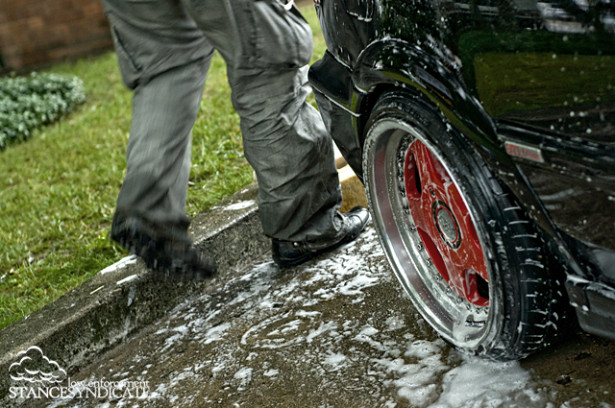 First thing that we had to do after arriving was to get the Corrado washed after 300km journey. Minutes later she was ready and dry. All we needed now was to find a decent slot to park her. We’ve spend a while driving around the place looking for a unoccupied spot, but as it was quite late already it looked like we’d have to leave her somewhere on the outskirts of the show. 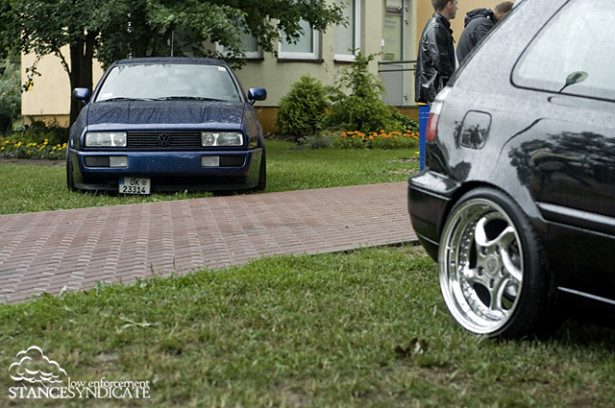 Luckily for us and my G60 Rado we’ve grabbed a perfect spot, in a top-class companionship – right beside the only Polish PVW featured cars: Kevin’s Mk3, Bestia’s Mk2 and Mati’s Jetta Mk1. Sorry guys for bringing the area’s level a bit down. Now when she was standing there proud together with the superstars we’ve went on a bit of sightseeing. 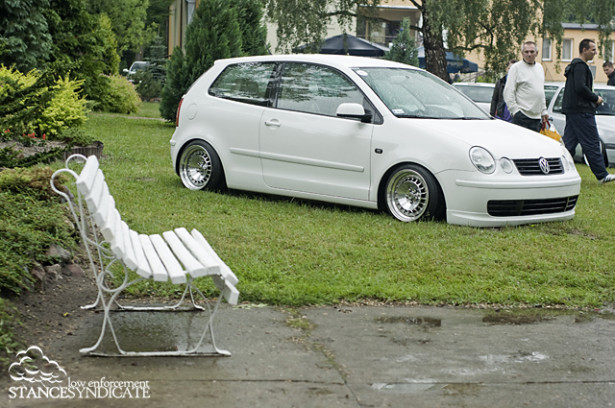 As usual we came over a bit unprepared and couldn’t start enjoying the show straight away. Having no place to stay overnight inhibited the start of beer drinking process. Thankfully to our saviors Przemo and Puzon we’ve got a hotel room keys at about 11pm. Now time for the fun came. We grabbed some few pints and picked a nice bench with even a better view at some grass munching cars. 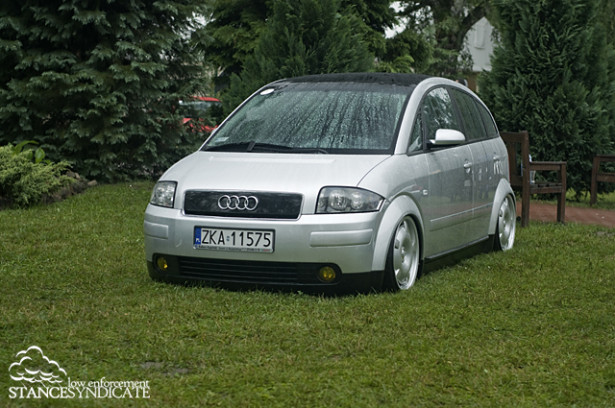 That was some night! While the DJ’s were playing tunes at the stage for the bouncing crowd we stayed on our bench sipping on pints and chatting with others. We’ve even got an air’d Audi Al2 poppin’ and lockin’ just in front of us. While enjoying the time we didn’t notice when the night became history.

After a dream about a garage full of VW’s we woke up for the Saturday’s fun. Again, as usual, we brought a bit of the fine Irish weather to Poland. What a pity! Some of those awesome features that VAG Event offers faded away. Yes! I’m talking about them hot Polish babes jumping into the pool in their bikinis as well as the other ones playing beach volleyball.. also in bikinis! Hmm.. we will get it in 2012, alright!

Having no pool nor bikinis I’ve left girls for a round of… pool and went on shooting those awesome cars that guys brought over to Żerków. Despite the weather for the ducks, the Wolfsgruppe crew were doing their best to keep the participants entertained. They prepared various contests and attractions ranging from laid back chat about cars to energetic airride battles. Meanwhile, in the background, the DJ’s been dropping beats. 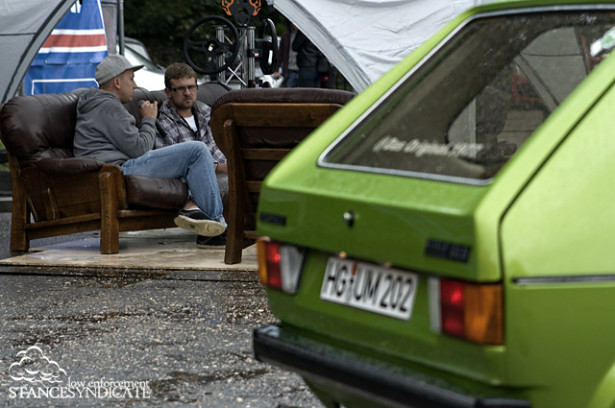 One of the many attractions was a show hosted by Wolfsgruppe’s Przemo: “Come over and tell us your story about your love”. For the comfort of both, the host and the guest, the organizers prepared a gazebo and some fancy leather sofas. Also the spectators weren’t left without a roof over their heads, those who wanted to listen to the show got a big tent with benches and tables. Moreover, draught Tyskie was available just around the corner. Happy days! 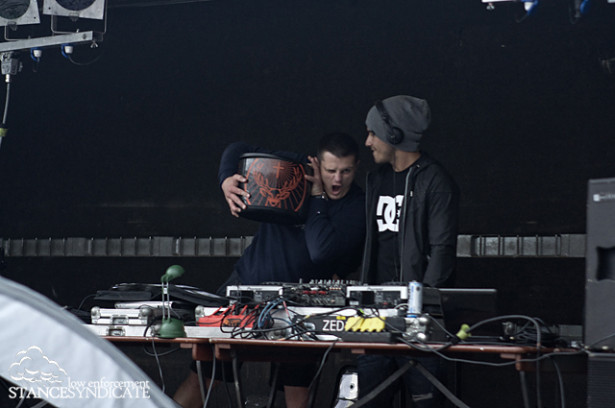 Even more happy were the DJ’s playing some decent tunes throughout the day as well as they did the night before. No wonder why they were so full of joy. You can’t go wrong with a bucket of Jägermeister… yeah, go for it the proper Dub style! They certainly did! 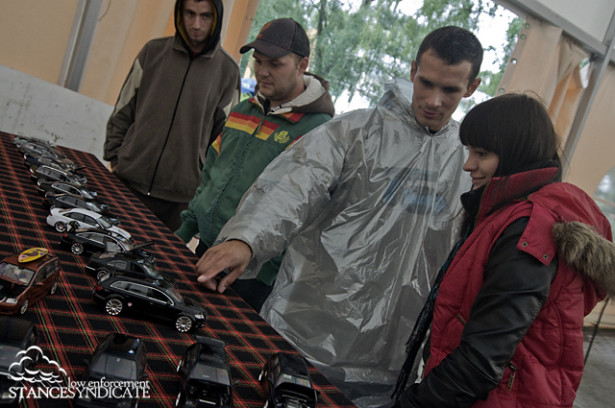 I found one thing to be very unique about VAG Event. Something that I didn’t see at any of the other shows and it wasn’t the Śląska sausage that we had with some Tyskie earlier. In the same tent, on the GTI fabric, a number of Dubs in scale were having their own show and shine. Furthermore, some of those models could be found on the show grounds in a 1:1 scale, if you know what I mean. Why not to go out and find these Easter Eggs, play a game. 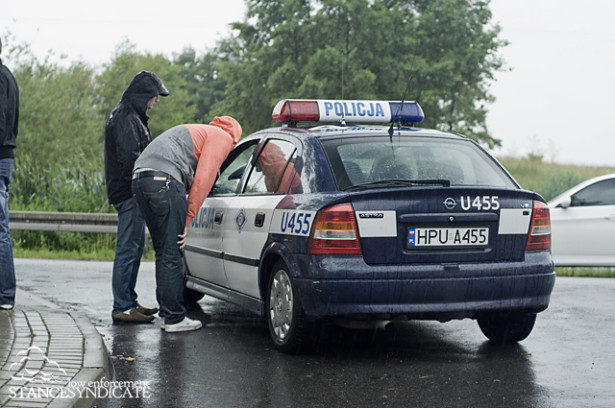 Coppers. We weren’t looking for these guys now, but they have showed up and wanted to enter the show and shine hoping that their fancy paint job and a very unique wrap would give them the “Car of the Show” prize. No luck this time. Wolfsgruppe’s Speed has explained them in a very polite manner: “Are you taking a piss guys? You’ve no drop, you’ve no wheels, you’re running Tesco’s poxy hub caps and.. it’s an Opel! Forget about it!”. They had to leave empty handed this time. 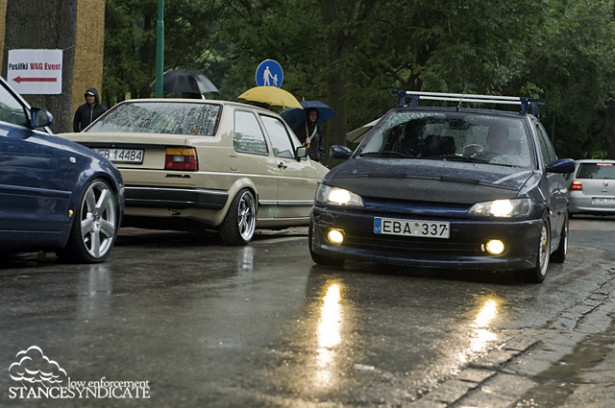 Not a good idea to be bringing an Opel to a VAG dedicated event, some orthodox players would even say: “Burn Opel burn!”. Well, it’s a different story with this Lithuanian Peugeot as it came along running some decent drop and a set of BBS’es. It wasn’t the only not Polish car. See, VAG Event is an international show with people coming over from all sorts of places in Europe like: Netherlands, Germany, Austria, France, Belgium, Czech Republic, Lithuania as well as Ukraine and Bulgaria. 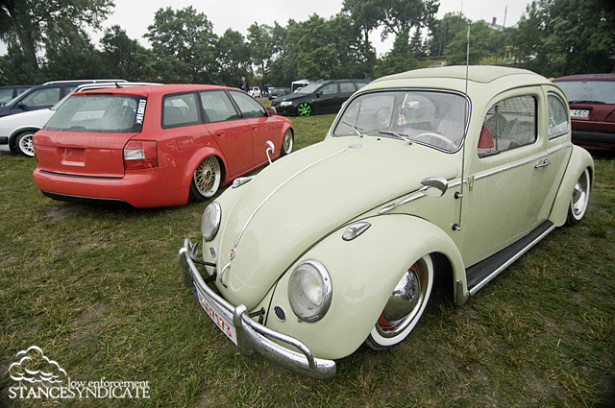 Moreover, a few guys flew over from England and Ireland. You are more then welcome too! We had a great time out on VAG Event and for sure we will be coming back next year! Warm atmosphere, very unique venue, top-class cars, fantastic fun and cold Tyskie is all that one needs and VAG Event has it all indeed! Many thanks to Wolfsgruppe crew for bringing such a quality not only to Polish scene but also to the European one. Well done!

Now, time to pack some film, lenses and cameras and set off for Wolfsgruppe’s BBQ. After writing this quick coverage on their VAG Event I’m so excited and just can’t wait for the weekend. If you’re not yet in mood for it then check out our full gallery on Facebook and Loniek’s VAG Event 2010 Official Video.