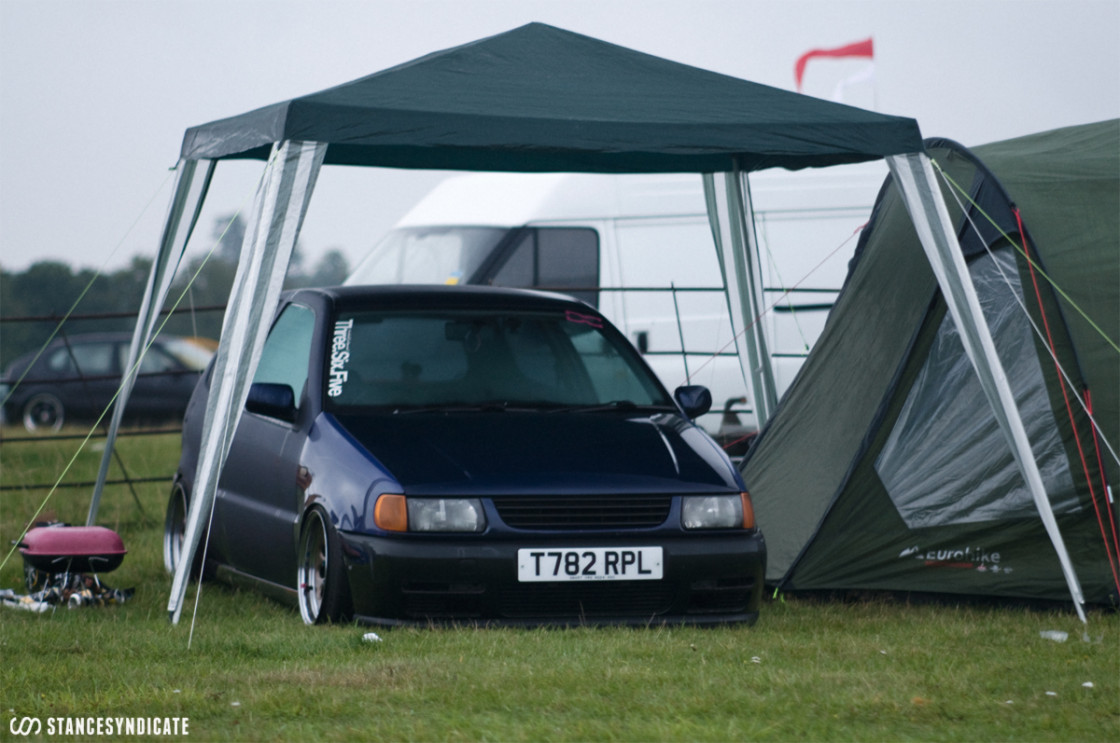 I wanted to travel to England for Edition38 since I’ve moved to Ireland. Over the last 5 years my plans always ended in the same way – “Too late now, I’ll go next year…”. That has finally changed now in 2011. Being unsure about the EU’s stability and the global economy, I’ve decided that it is high time to go, hope that I won’t jinx it, but I thought to myself that it might be the last chance to experience Britain’s finest VAG show and shine before that poxy economy collapses on all of us turning the scene into wood and hand saws era. 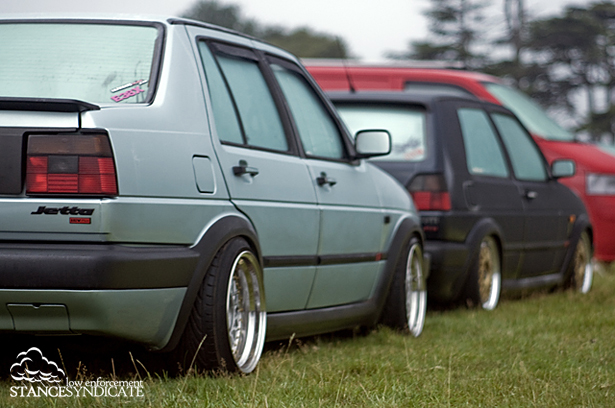 Together with my girlfriend and a mate from Northern Ireland we decided to fly over, rent a car, stay in a B&B and enjoy the show. Unlike my trip to Holland for MIVW this one was meant to be a smooth ride. My mate, Szymon, was at work until 12:15 on Friday, thence we needed to book tickets for late afternoon. And here’s where the adventure starts. The only suitable flights were: Derry to London Stansted and return to Belfast. Not too bad. 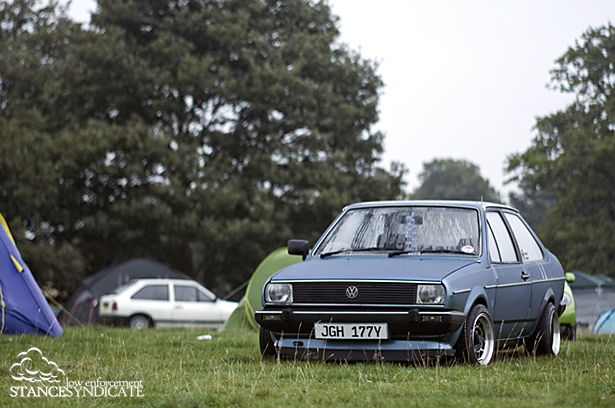 But first we needed to drive over from Dublin to Coleraine to meet with Szymon. After some 250km trip we left my slammed Vento in front of his door and drove to Derry to fly with that useless Ryanair. This time I’ve cheated a bit on them and squeezed in a compact tripod in my bag and instead of taking photo gear in my photo bag, I’ve wrapped it in socks and shirts to save on space. 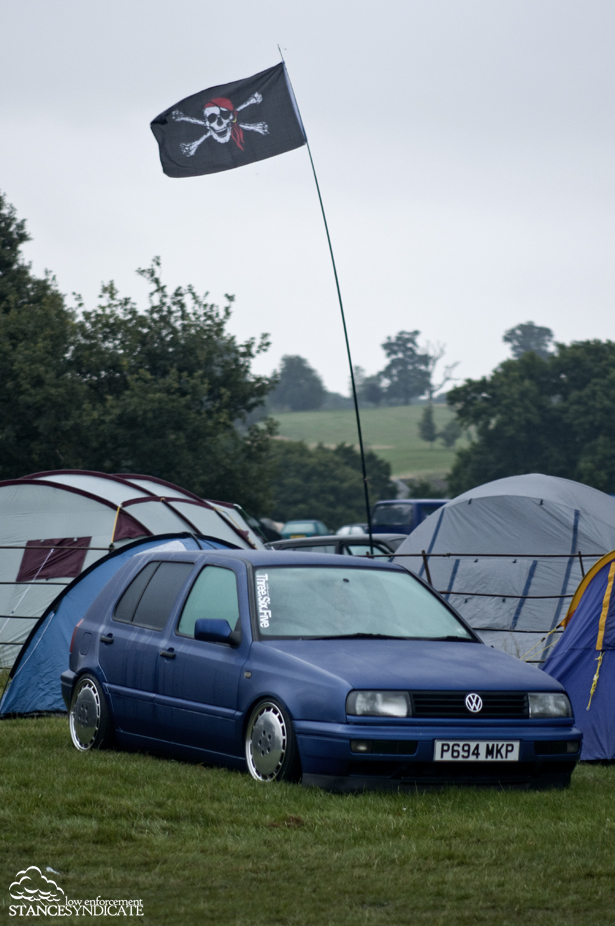 As soon as the airport’s security personnel saw my ugly face they had to check my bag for dope with something that looked like a beer bottle cap bonded in by a piece of chewing gum to your old shoehorn. Yeah right! My camera was stuffed with a load of Pakistani’s finest! Can’t say a bad word about Ryanair’s staff either. These people must be treated really well by company’s management to produce such a great customer service. I’d call it a bit racist, but I’ll leave it where it is, as I know what means working for a cheap company wrapped in blue and yellow. 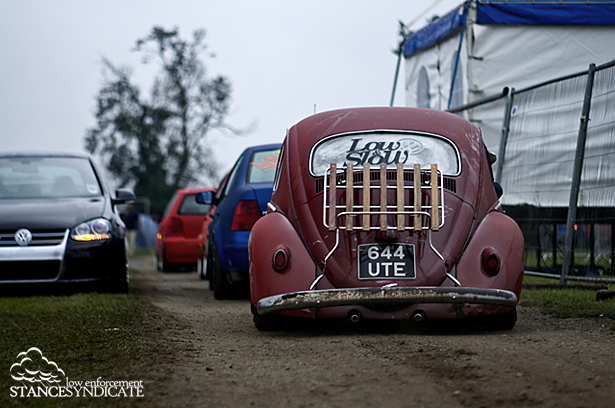 Also, Han Solo fella, behind the steer of the plane, probably forgot that he’s not flying an F16 over Libya but a passenger Boeing 737. He rocked the plane aggressively from side to side banking right towards London and immediately serving all passengers a superb and the most delicate approach I ever had. I thought that the pressure will blow my head off! No more Ryanair for me… please! 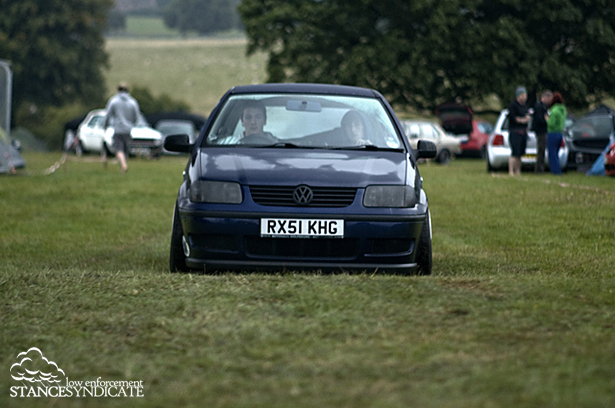 Eventually Han Solo and Chewbacca didn’t manage to crash the Millennium Falcon and we’ve safely landed at the Stansted airport. Instantly as we left the cabin we were hit by a “heatwave”. It was some 23 degrees out there. “Wow! It’s summer” – we thought as it was only 13 degrees in Derry when we left. This is what you call a warm welcome! 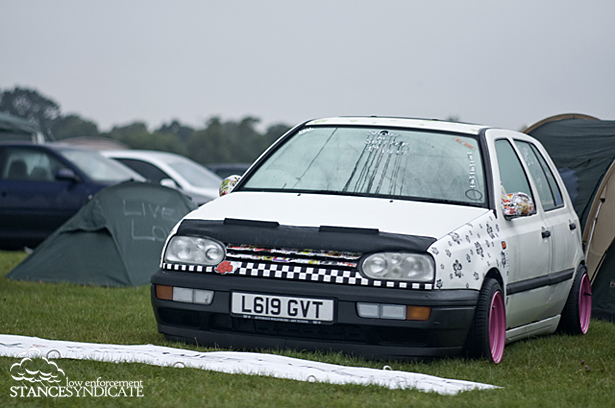 I booked a Nissan Juke a.k.a Yuk!, probably the most disgusting car ever produced, anyway, we rushed to car rentals desk to pick it up ASAP. What a pleasant surprise! The man behind the desk told us that we’ll get a Peugeot Partner instead and a few minutes later we were ready to hit the road in our 1.6 speed daemon. Our trio was very happy and the atmosphere was amplified more by Radio 1 playing some serious DnB through those cheap Peugeot speakers. They must have been Bose for sure! 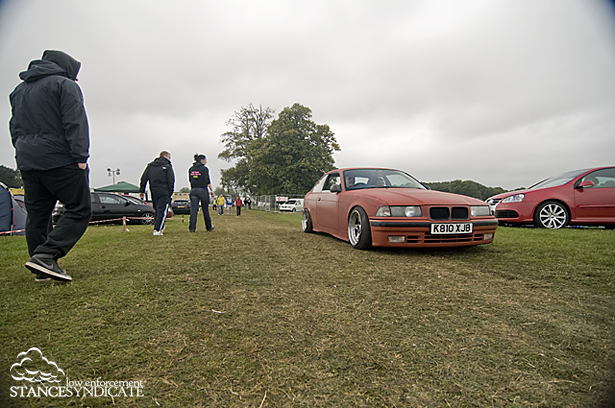 We’ve made it! Thanks to very helpful Edition38 crew at the gate we’ve decided to ditch our B&B plans and go camping! “Have you showers on the site?” – we’ve asked. “Yes” was the reply, followed by our “f..k the B&B! “We’re camping!”. Was it over, over and left? Thanks for directions to the nearest Tesco where we bought sleeping bags and a cheap tent for a few quid plus some Silesian Sausages for a BBQ. There’s nothing better than grilled “Śląska” sausage at a camping site. With camping gear, sausages, cheap 22p Tesco’s ketchup and a box of beer purchased we were ready to do Edition38 the right way! 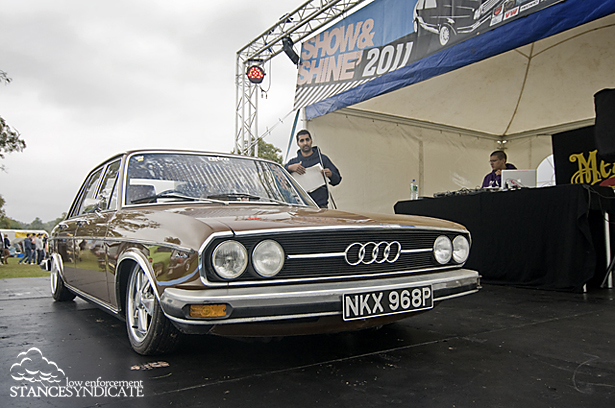 We got back to the gate, paid the fare for the weekend and slowly strolled down the camping site on hazard lights. In few seconds a group of lads surrounded us. Yes, we brought a dodgy Peugeot van to a VAG event. “You are going to be on official Edition38 film” – one of the lads that was holding a camera has shouted. “C’mon, get out and do a rollie pollie for us” – they wanted us to go crazy from the very beginning and as we all like good fun Szymon got out and have performed a rollie pollie for the craic! 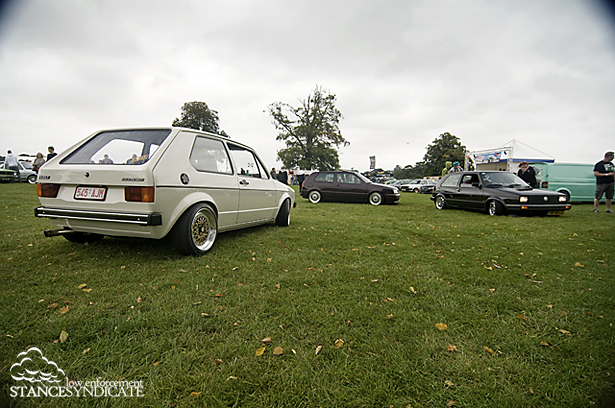 “C’mon, do a 2nd gear burn-out for us” – they wanted more! More craic for their footage. Szymon dropped in 2nd gear and “burnt” grass and mud. We drove away in search for a good camping spot that we found just beside a yellow eyed Lupo. She was a charming neighbour. Wrapped in yellow lamin-x head lamps and fogs in company of black paint job and gray BBS RM’s with polished lips. Nice set! 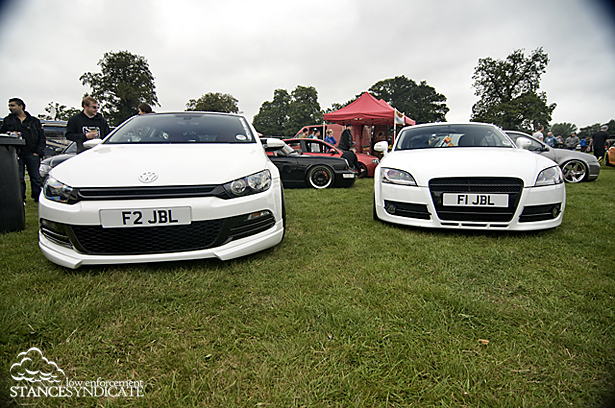 We decided to go to the party tent straight away and only then set-up our tent. It was too late. The party was over, but there was a lot going on at the camping site. We had some cans of beer and instantly got drowsy from drinking it. Exhausted after the whole day long journey we decided to head back to our Pug and install ourselves at the camping site. The sky was clear. Promising. It seemed the morning might be pleasant. Nice, low and fat VW’s were sleeping everywhere. Party on the camping site was on until early morning hours. Although tired, it wasn’t too easy to fall asleep. Only Szymon has been lucky. He locked himself in our sound-proof Partner. 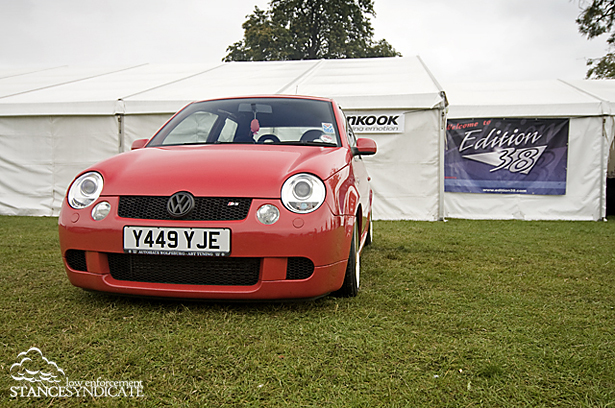 I always wanted to take pictures of cars in the morning when they’d be still covered in dew. Now I’ve got a chance, so I got out of the sleeping bag around 6.15 after only 3 hours of sleep. I’ve locked my shoes with Szymon in the Partner to have them nice and warm. Now I was standing bare foot shaking on the wet and cold grass knocking on the window to wake him up. “Get up! It’s morning already!” He decided to join me in the morning exercise and we went together down to the Edition38 scene stopping by here and there to a picture. 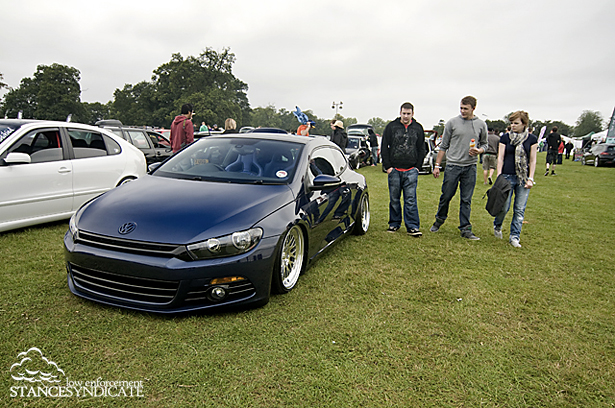 It was still very early and the majority wasn’t aware of the coming hangover after yesterday’s night yet. Only a few people were walking around as well as the key players. These the most serious about this game were already getting their cars over to the show ground. I’ve texted Przemo from Wolfsgruppe: “Get up! It’s getting massive here already” – I thought he’d be still in his comfy bed in the hotel. “I’m beside Dubkorps stand setting up Eurowagens tent” – Przemo replied. There was a number of people who woke up early to do some “morning passion exercises” despite partying last night. This is what you call commitment to one’s passion. It’s fun. 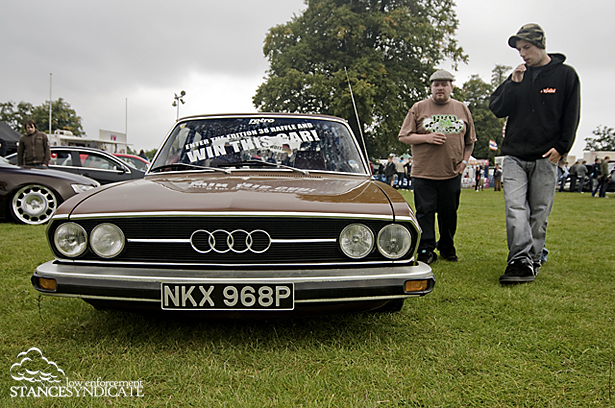 It was only about 10am when all of the above shots were taken, but we already felt pretty sick seeing all these cars. At some stage Szymon said: “OK, let’s get outta here, let’s go to London, I don’t want to stay here anymore. These cars are too good, I just can’t cope with it”. Of course we stayed trying to deal with these butterflies in the stomach and endless lack of focus. Here’s a few more snapshots from the morning of Edition38’s Saturday and more coming soon! 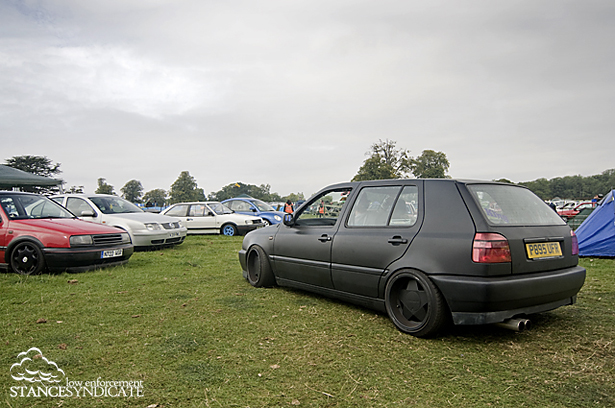